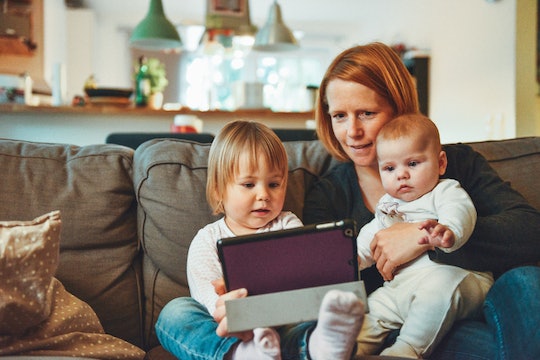 For so many families, staying at home with young children isn't a luxury — it's actually the most financially responsible decision they can make. And in the United States, child care costs have parents choosing between work and staying at home with their kids, because there's no affordable alternative. These rising care expenses have caused a major shift in working populations, as parents (mothers, most often) have no choice but to leave the labor force in order to ensure that their families are safe on all fronts.

"If the cost of child care is going to eat up my entire salary, then it might make more sense for me to just continue to stay home with [my child]," Janet An, a mother to a 5-month-old daughter, told CBS Los Angeles.

As An told CBS Los Angeles, she has decided that the best thing for her to do right now is suspend her law career and stay home to take care of her baby. Still, she realizes that taking time off to watch her little girl doesn't just mean that she's losing out on her annual salary — it also means that, further down the line, she's likely to experience less wage growth and lower retirement savings. So, no matter which option she chooses — going back to work and hiring a child care professional or staying home instead — the unfortunate repercussions are massive, for An as well as her family.

In order to estimate the exact losses that staying at home can incur, economist Michael Madowit created the child care cost calculator. As CBS News reported, the calculator's website shares that the "annual cost of a child care center for a typical American family with an infant and a 4-year-old is nearly $18,000," necessitating that families put aside nearly 30 percent of their paychecks to childcare. Using this online tool, families can see just how much they stand to lose in the long run, because the immediate losses are only part of the story.

According to Pew Research Center, 29 percent of women identify as stay-at-home mothers, compared to 16 percent of men who are stay-at-home fathers. Pew also noted that 39 percent of moms reported to "[having] taken a significant amount of time off from work in order to care for a family member (compared with 24 percent of fathers)." This unsurprising gap suggests that women abandon their careers to take care of their families more frequently than men do.

There's truly no "winning" this situation, so what can be done? Advocating for federal child care assistance can help lower costs, for one; Given that there is no federally mandated paid parental leave policy in the United States, many families find that, in the moment, leaving work isn't possible. Reducing stigma around the working parents versus stay-at-home parents debate can also relieve unnecessary pressure from families that already have a lot on their plates as it is. As shown, there are numerous factors to consider here, both financially and care-wise, so what works for one family might not be the right choice for another.