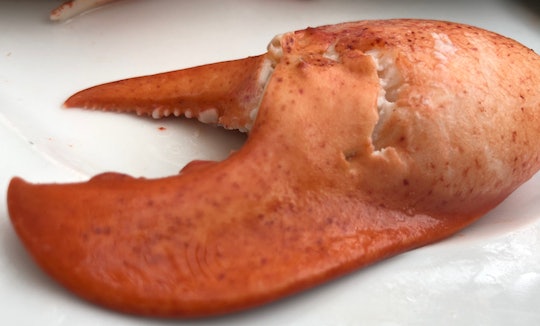 A 3-lb. Lobster Claw Was Spotted At Costco & It's Not Even The Biggest One

Peak seafood season hasn't begun quite yet, yet crustaceans of epic proportions are already making waves. Giant lobster claws have been spotted at Costco stores around the country, and shoppers are flipping over their size. "Consider The Lobster" just took on a whole new meaning.

This bizarrely big story goes back to January, when Costco customers first started noticing abnormally sized crustacean claws lining the coolers at their local stores. FoodBeast reports shoppers finding claws between two to seven pounds, which is massive in the lobster limb industry. According to the Maine Lobster website, these crustaceans usually weigh in at about one and a half pounds total — as in the whole creature weighs that much.

So a claw that is double or triple that size is pretty outrageous, but if any retailer would be able to provide the public with gigantic talons, it would be Costco. The literal superstore has made itself a household name through its huge portions of snacks and household essentials, so it was probably only a matter of time before they applied their oversized skills to work on seafood. Want proof? Check out the pic Instagrammer @julesfood posted of the 3-pound claw she stumbled upon on her latest Costco trip.

And that's just the lobster's claw. How big must the entire sea creature have been? I keep picturing Keenan Thompson's lobster costume from SNL's "Diner Lobster" sketch, though I doubt there are lobsters as big as grown men crawling around. (At least, I hope there aren't.) Reddit user u/bkilaa posted a seven-pounder they spotted in Costco a month ago, and it's just as impressive.

Imagine having to carry that to the car. Comments on the post revealed that the retailer was selling the claw for about $70, which is approximately $10 per pound. That's one expensive dinner, but I guess claws bigger than your torso don't come around too often.

The colossal claws have mostly been spotted in California Costco locations according to Delish, with West Coast shoppers posting proof of their massive finds all over the web. It makes sense the crustaceans are coming from California, as Coastal Living reported that lobster season actually runs from September to March there because of the warmer climate. Peak season for Maine, the unofficial lobster capital of the United States, runs from June to December.

It's unclear how much longer these hefty pleopods will be available, so you might want to snag one while you still can if you're a Cali local. But don't despair if you're not West Coast chilling; Thrillist reported that Canadians have seen lobsters weighing as much as 15 pounds in their local Costcos, so there's hope for you to find a massive claw at some point in your life yet. Plus, the gigantic size doesn't necessarily mean the seafood will be tastier than the average lobster claw, but you'll definitely have enough to go around. Make sure you get bibs for the family before diving into one of these bad boys.