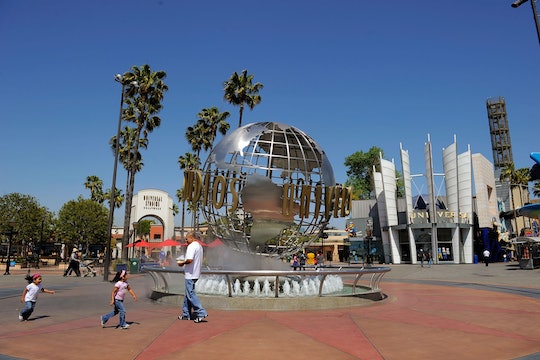 Let's say you have bigger kids who would love to take more thrilling rides, or go shopping on a fantasy street featuring every awesome brand imaginable. Then let's add in a youngest kid acquiring a Harry Potter obsession. Let's say this is actually me, and clearly, you are in the market for a pass to an amusement park that will please all of the above. Well, with this amazing new offer, the choice of which venue to pick to make those special family memories is clear: Costco’s Universal Studios ticket deal for three visits is such a steal, you'll have cash to spare for cotton candy.

As Popsugar reported, the new ticket deal from Costco allows club members to purchase one 3-visit ticket to Universal Studios Hollywood in Los Angeles at a really great rate: $139 per family member. A 1-day pass start at $109 (or $103 for a child), this deal is a pretty incredible change to save cash but still enjoy that long overdue family vacation.

Best of all, it's not one of those "vacation" passes where you have to do everything in one week, but is valid for 12 months, starting from the first visit. That means any family that can plan a trip to Universal Studios in Los Angeles, California a couple of times a year can really make use of Costco's deal.

Costco's deal, the details of which are on the company's site, is done e-ticket style, so once you register online (and you need to give it enough time to process, families like mine sometimes do things last minute... which I don't suggest), you'll need to start planning the trip by picking your first park visit date.

From there, you have the year to complete the package with another two days of fun, but advanced registration is required for all three trips to Universal. It's unclear whether or not you can change the dates once they are in the system, so I suggest reading the fine print very carefully before finalizing any details. If necessary, you should contact Universal Studios directly to clarify.

It's worth noting that here are some blackout dates on this deal (mainly holiday time), so pay close attention to those details as well. Those two warnings aside, I can assure you this theme park is a really great time for the family. Believe it or not, I literally just went with the fam... right before this deal. (Better not even to think about what a bargain I missed out on, right?)

There is also a section dedicated to The Simpsons, a newly relaunched Jurassic World ride, and a Minions 3D extravaganza. Plus, there's also the Universal Studios Tour, which is worth the whole price of admission alone in my own personal opinion.