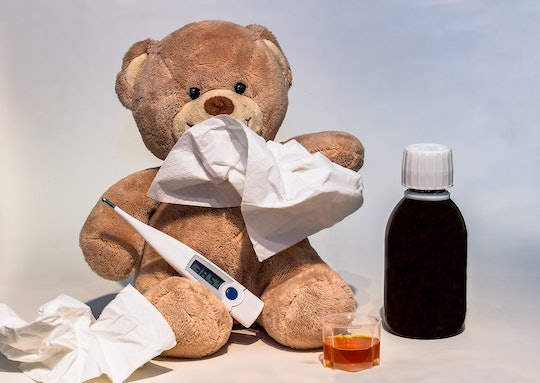 There's nothing like being kept awake all night with a nasty cough. When it's your kid who can't stop hacking, it's even more misery-making. Most parents don't hesitate to break out the cough syrup if it means everyone in the house will be able to get some sleep, but does it actually work? A new study claims that cough syrup is probably just a placebo, but does that mean you shouldn't dole it out when your family gets sick this winter?

Cough medicine, usually in syrup form, has been a staple of the American medicine cabinet for centuries. The stuff used to be a lot ickier, and once upon a time was made primarily from heroin, but the kind you get at the store today is narcotic-free and is generally considered safe. If you stick to the dosing instructions on the label, anyway.

The active ingredients in today's recipe usually include a cough suppressant, like dextromethorphan, which tells your brain not to cough, and an expectorant, which thins out the mucous in your lungs, so if you do cough it will be more "wet" than "dry." A wet cough is a productive one, meaning you're coughing up some of that germ-filled mucous. Some brands also have decongestants and antihistamines, which help reduce the congestion of a stuffy nose. They also tend to make you sleepy, which is fine if you're home sick but can be annoying if you have to go to work or school.

That being said, does this stuff actually work? The American Chemical Society released a YouTube video based on a review of research they conducted, that suggests maybe cough syrup doesn't actually do anything after all. Most of the research out there on the effectiveness of cough medicine to treat a cough were inconclusive at best, and most of the time showed that cough syrups were no better than placebos in clinical trials.

In fact, the placebo effect might be at work with cough medicine itself, and certainly when you're sick and not sleeping, a drug cocktail that promotes sleepiness is bound to at least feel like it's working. The extra sleep you get from that drowsy-making medicine is probably what makes you feel better — not the medicine itself. At least that's what research seems to be finding.

The clinical trials found that they couldn't really prove that any part of the medicine — the expectorant or cough suppressant — actually worked, and that the antihistamine portion wasn't any more effective than the placebo version. Another study concluded that it couldn't say whether cough syrup was helpful or not, but it also couldn't prove that it was harmful. Most reported side effects from cough medicines, when used as recommended, are minor and not life-threatening. That means that while researchers are starting to think cough syrup might not have any benefit, they also can't prove that taking it could make things worse, or be harmful in some way.

So, should you toss the cough syrup or keep it on hand? Most researchers concede that since it's safe (as long as you're not taking too much), and if you believe it makes you feel better to take it, that placebo effect might be helpful enough to get you through until the cough goes away on its own (as they usually do). Kids, too, might respond better to a medicine that's meant to help their cough go away, especially if it's also helping them sleep through the night. Pair that with some chicken soup, a placebo that at least offers some nutrition and helps restore fluids, and they should be feeling better in no time.