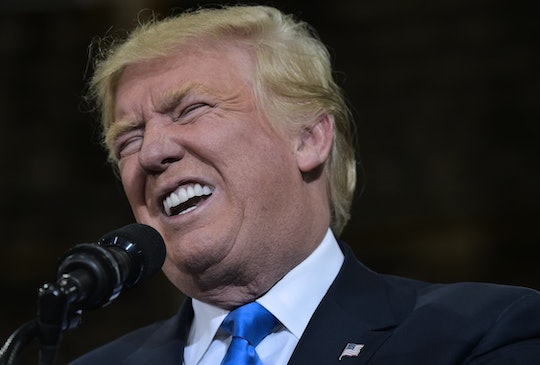 Could A Petition Take Trump Out Of Office? It's Highly Unlikely

When Donald Trump officially won the presidency on Tuesday night, the first thought for many Americans was "how did we end up here and how do we get ourselves out of this?" Clinton's defeat is devastating not only for her most diehard supporters, but for many in the #NeverTrump faction — both Republican and Democrat — who wanted to ensure that the candidate would never get his hands on the highest office in the land. That nightmare scenario came true this week, when a candidate who depended on xenophobia, fear mongering, and claims of a rigged election (funny how suddenly the election isn't rigged now that Trump has won), has officially ascended to one of the most powerful positions in the world. The reality of a Trump presidency is here, and it is terrifying. And though many feel it would be fantastic if there was a petition that could take Trump out of office, sadly for them, it's not possible.

In the eight years since President Obama was elected, there have been innumerable petitions launched to take him out of office. For many far right Republicans, Obama was the exact antithesis of what a President should be. Despite many efforts to start petitions to end his presidency, Obama is still standing with only a few mere weeks left in his second term. Since Trump beat Clinton on Tuesday, there have already been similar movements to derail his Presidency from ever truly taking off. The truth of the matter is, though, that the United States Constitution does not set a precedent that allows for the removal of a sitting President. The one exception, of course, is impeachment.

Right about now, some may be thinking "Okay, great, let's impeach Trump." It's not that easy. Impeachment is limited for instances of "high crimes and misdemeanors" committed by a current President — so unless and until Trump carries out such activity, impeachment is out of the question.

There have only been 2 presidents in the history of the United States that have been successfully impeached by the House of Representatives. Andrew Johnson, the 17th president of the United States, took office after Abraham Lincoln was assassinated and was impeached on February 24, 1868. The next president to be impeached was Bill Clinton in 1998, so to say impeachment is rare is an understatement. Clinton and Johnson were both acquitted by the Senate, as well, which makes a Trump impeachment look even more unlikely at this point in time. President Richard Nixon also faced impeachment in the aftermath of the Watergate scandal, however, he resigned before it came to fruition.

The reality of our current situation is that petitions can only bring about recall elections on the state level and not the federal level. There are 19 states that have recalled elected officials at both the state and local level. Despite there being no current mechanism established within the U.S. Constitution that would allow for a sitting president to be recalled through a popular vote, there is obviously some level of support for federal recalls if unhappy citizens work to establish petitions to remove presidents from office.

Recall advocate Barry Krusch produced a document titled 21st Century Constitution, in which he lays out a plan for how recalling a president would work. Krusch believes that the question "Should the President be recalled?" should appear on the general election ballot if enough Americans are unsatisfied with their a president's performance in office. If a majority of voters decide to recall a president, then the vice president would ascend to the Oval Office.

Krusch's plan certainly sounds appealing at this moment in time — when Americans have somehow elected arguably the most divisive candidate in our nation's history — but it also has the potential to set a precedent that could harm our country in the long run. The Harvard University Institute of Politics conducted a survey in 2013 found that 52 percent of young Americans, many who voted to elected Obama, would have voted to recall Obama at the time the poll was taken. Many historians believe that Obama will be remembered as one of the greatest president's our country has ever seen, yet there was a point in time when Americans would have voted to take back their vote for him too.

It turns out there is no simple solution to change the outcome of this election. There is no magic petition that Americans can sign to remove Trump from office. Those dissatisfied among us will simply have to work hard and continue to vote in state and local elections to keep level-headed, compassionate, and intelligent public servants that value and uphold the American system of checks and balances in office. Perhaps this is the best solution to counteract and possibly minimize the damage Trump may do as president.