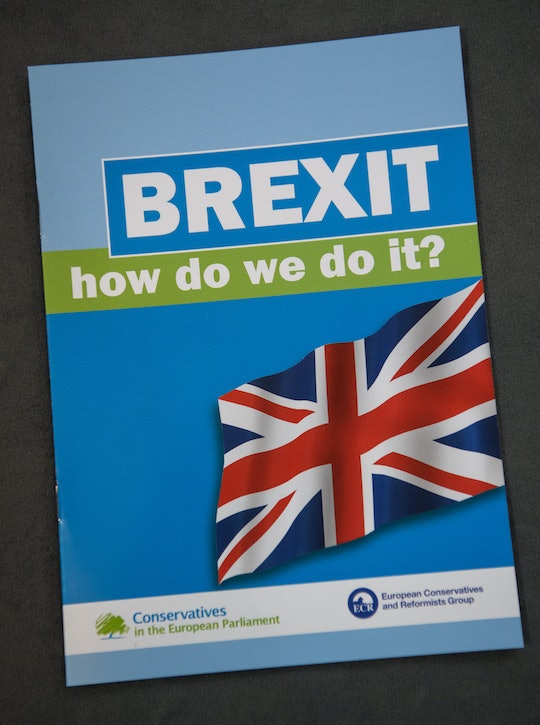 Could Brexit Be Called Off? A New Court Ruling May Have Opened The Door

The U.K. High Court is now insisting that another vote be taken before Britain can start its exit from the European Union. After all of the tumult that the initial vote has caused already, could Brexit really be called off? This recent ruling has insisted that Parliament take a vote on the measure before any Brexit-related negotiations can occur, which at the very least may slow Brexit's timeline down a bit. Though Prime Minister Theresa May said last month that she intends on triggering the Article 50 by this coming March, on track to have Britian separated from the European Union by 2019, a Parliamentary vote might delay this.

Challenging the government's ability to initiate Article 50 of the Lisbon Treaty on its own, the ruling will prevent any formal Brexit negotiations from taking place until Parliament's had its vote. The court ultimately ruled that the government "does not have power under the Crown’s prerogative to give notice pursuant to Article 50 of the for the United Kingdom to withdraw from the European Union."

The U.K. Government reported being "disappointed" by the court's decision, intending to appeal the measure to the Supreme Court. Thus, another hearing will occur in December to reconsider.

Matthew Goodwin, a politics professor at the University of Kent, warns against Parliament even holding a vote, insisting that it will simply aggravate an already-sensitive situation:

To many, this will look like nothing short of a great betrayal, an attempt to undermine the sovereignty of the people....Members of Parliament might get a vote, [but] it would be political suicide for them to ignore the wishes of their constituents.

Some, like Ukip leader Nigel Farage, feel the potential "betrayal" quite deeply:

I worry that a betrayal may be near at hand … I now fear that every attempt will be made to block or delay the triggering of Article 50. If this is so, they have no idea of the level of public anger they will provoke.

Delaying Brexit means that Prime Minister May would have to present an exit strategy, seeking Parliamentary approval by vote. The New York Times reports that May's resistance of doing so stems from her belief that it "would impede her flexibility in the negotiations, preventing Britain from getting the best possible deal." Though the reconsideration of Brexit is in its early stages, it's looking like the opposition will continue to challenge its validity, despite the referendum having won a majority of the citizens' votes. Anti-Brexiters aren't going down without a fight—fights that will be held periodically, and in courtrooms.