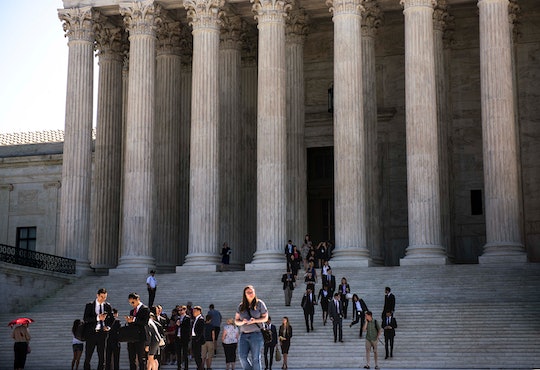 Could Brock Turner's Sentence Be Reversed? It's Not Likely

Brock Turner, the former Stanford swimmer who was caught raping a girl behind a dumpster last year, received a six month jail sentence this week, sparking outrage across the country. The victim's poignant impact letter to Turner, which went viral, describes the aftermath of the rape in salient detail. Turner's lenient sentence despite the case's glaring evidence, has led thousands to demand a recall of the judge. On Thursday, Texas Rep. Ted Poe demanded the Court of Appeals overturn Turner’s sentence. But could Brock Turner's sentence actually be reversed?

It is unlikely. The prosecution would only be able to challenge a sentence if it were unlawful. However misguided his sentencing may have been, the judge followed the law and the recommendation of a probation officer who advised against jail time. Normally, assault to commit rape, when paired with the other felonies Turner was charged with, would result in a mandatory two-year prison sentence. But judges can deviate from that rule in cases of "unusual circumstances." The probation report used Turner's age, level of intoxication and lack of a criminal record to justify an unusual circumstance in this case.

"We believe that he made the wrong decision ... that he should have sentenced Turner to prison," District Attorney James Gibbons-Shapiro told The San Jose Mercury News. "We don't believe that we have a basis to appeal or seek a writ in this case, though, because his decision was authorized by law and was made by applying the correct standards."

Still, many are calling for a recall of the judge. More than 900,000 people signed a Change.org petition calling for judge Aaron Persky to lose his job. About 100,000 others have signed similar letters at MoveOn.org and other sites. For his part, the judge signed on for a new six-year term this week. He would have faced rivals at the ballot on Tuesday, but no one else put their hat in for the job.

"I think it is absolutely absurd. The man is an excellent jurist," said Gary Goodman, a public defender in Palo Alto told CNN. "He does things the proper and the correct way. I hope it doesn't have a crawling effect on other judges that are voted for — that if you make a wrong decision, people are going to come after you and try to make you change your decision, when those people have no idea of what happened at that trial."

Some say what's most troubling about this case is that it illustrates how judges sympathize with criminals who look like them.

"Too often, police, prosecutors, and judges make decisions about what kind of people 'belong' in the criminal justice system based on how closely they can relate to the person who has committed the crime," Rachel Marshall, a public defender in Oakland California, argued in a column over on Vox this week. "When the judge who sentenced Turner looked at him, he saw a person with whom he has a lot in common: white, attending Stanford (where the judge in this case graduated from — and where I also attended), a top-ranked swimmer, wearing a suit, and with similarly successful family and friends rallying to support him."

While Turner's case is unlikely to be over turned, it has sparked a necessary discussion about how rape culture is promulgated through the criminal justice system. Let's hope this debate will help change the way we handle rape in America's campuses and courtrooms alike.