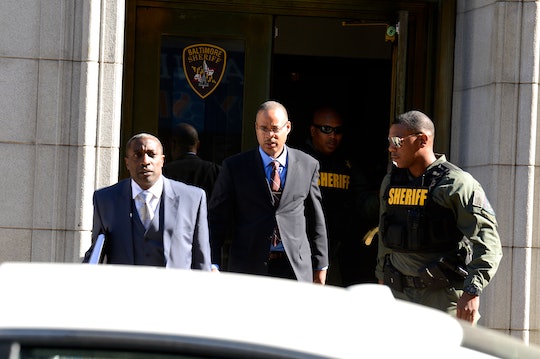 Could Caesar Goodson Be Retried? Some Say The Verdict Came From A Biased System

Earlier today, Caesar Goodson, the Baltimore Police officer and van driver who was accused of giving a "rough ride" to Freddie Gray (a ride that ended in Gray's death), was acquitted of all charges, according to the Baltimore Sun. Goodson had faced several charges in the case of Gray's death, including second-degree depraved heart murder, three counts of manslaughter, second-degree assault, reckless endangerment, and misconduct in office, but prosecutors failed to prove to the court intent and/or negligence. But could Caesar Goodson be retried?

It seems unlikely. By definition, a retrial is "a second trial...[that] occurs when the initial trial is found to have been improper or unfair," according to The Free Dictionary. In most cases, retrials occur if jurors are unable to reach a verdict (i.e. a hung jury) or if a mistrial is declared. However, according to the American Bar Association, a retrial can be requested through the appeals process, but not all parties can appeal all cases:

In a civil case, either party may appeal to a higher court. [However] in a criminal case, only the defendant has a right to an appeal in most states. (Some states give the prosecution a limited right to appeal...[but] appeals by the prosecution after a verdict are not normally allowed because of the prohibition in the U. S. Constitution against double jeopardy, or being tried twice for the same crime.)

So, while many activists on Twitter outraged by the verdict, the prosecution may not be able to retry Goodson regardless.

According to The Baltimore Sun, Circuit Judge Barry Williams did believe Goodson displayed poor judgment while transporting Gray; however, Williams noted that poor judgement (in and of itself) isn't a criminal offense, and the prosecution failed to prove the criminal aspect of the case: that Goodson deliberately harmed Gray. What's more, the prosecution failed to prove negligence.

But some, like David Jaros, a law professor at the University of Baltimore School of Law, knew from the outset the charges against Goodson would be difficult to prove. In an interview with The Atlantic earlier this month, Jaros explained exactly what "depraved-heart murder" is:

And Jaros was right, as the prosecution faced difficulties early on, and as Williams stated today, prosecutors failed to substantiate their "rough ride" theories, adding "the court cannot simply let things speak for themselves.”

Four of Goodson's colleagues still face various charges, and the next trial, of Lt. Brian Rice, is scheduled to begin July 7.