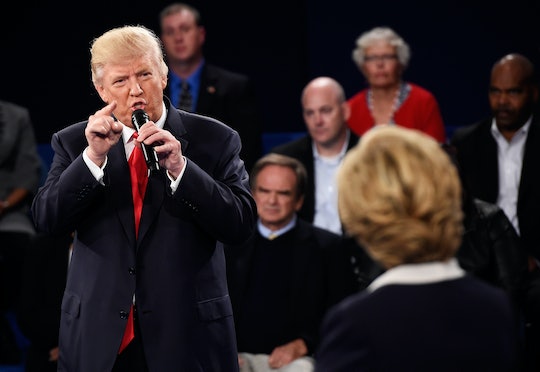 Could Donald Trump Actually Put Hillary Clinton In Jail? He Threatened To At The Debate

During the second presidential debate Sunday night, Donald Trump said that if he won the presidency, then he would ask his attorney general to appoint a special prosecutor to look into Hillary Clinton, because he said there have been "too many lies," though he didn't specify about what. He mentioned former Democratic National Convention Chair Debbie Wasserman-Schultz, Vermont Sen. Bernie Sanders, and Clinton's emails (because of course). Could Donald Trump actually put Hillary Clinton in jail if he did win the presidency? She has already been through a thorough investigation, so I'm not sure what prosecutor Trump thinks would reopen the case and find anything different that what the FBI found.

Update: Former Attorney General Eric Holder tweeted during the debate and said "So @realDonaldTrump will ORDER his AG to take certain actions-When Nixon tried that his AG courageously resigned. Trump is dangerous/unfit." Clearly it is not common and actually frowned upon for presidents to order the attorney general to investigate or prosecute a specific person.

According to Fox8, Trump said during the debate:

It was a strange thing to say, because Clinton has already been thoroughly investigated by the FBI. She underwent hours of questioning as part of the investigation, and, at the end of it all, FBI Director James Comey said he did not recommend criminal charges for her, according to The New York Times. He did call her "extremely careless" in the way that she used her private email address and her server, but said that she wasn't hiding anything. Additionally, it's worth noting that what Clinton did with the use of her private email has been done by two other secretaries of state. (That is not to say it is an OK thing to do, but those other secretaries did not face criminal charges.)

It's unclear if Trump could use federal tax dollars to start a new investigation on Clinton when one has already been conducted. He didn't allege anything specific against her, he just said there have been "so many lies."

Many have already criticized the focus on Clinton's emails, saying that it was a witch hunt by Republicans and was actually a way to hurt her run for president. In a report for Democrats, Kevin McCarthy characterized the investigation, according to the Daily Beast:

Decades in the future, historians will look back on this investigation as a case study in how not to conduct a credible investigation. They will showcase the proliferation of Republican abuses as a chief example of what happens when politicians are allowed to use unlimited taxpayer dollars—and the formidable power of Congress—to attack their political foes.

If Trump did manage to win the election and have Clinton investigated, it might be a waste of taxpayer dollars because it's unclear if it would turn up anything that wasn't already thoroughly combed over by the FBI.