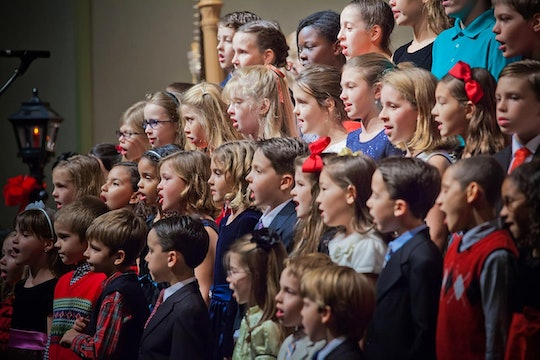 Recently, more and more schools are "mainstreaming" students with high-functioning autism, or integrating them into traditional classrooms. While this provides a great many benefits not only for the kids on the spectrum, but their neurotypical peers, it's not without its challenges, especially when it comes to social interactions. But some experts say drama classes can help kids with autism, teaching them social skills that can help them with their real-world interactions.

Blythe Corbett, an associate professor of psychiatry at Vanderbilt University, told The Atlantic about her SENSE Theatre program, where she teaches kids with high-functioning autism drama exercises such as role-playing and improvisation. The kids work with older "peer models," neurotypical children who've been specially trained. Corbett studied the kids in her program and compared them to a control group, and she found that the drama students were "better able to recognize faces, understand different perspectives, and regulate anxiety." Brain imaging also revealed that their brains were more similar to those of children without autism. These changes could be explained by the fact that improvisation requires the participants to be flexible and rely on the social cues of their partners. The Atlantic noted that many children with autism rely on internal scripts to deal with social interactions, so acting is a language they're already familiar with.

According to Autism.org, children with autism can have difficulty with verbal and non-verbal communication. They may not easily grasp the concept of taking turns in conversation, or discussing a topic they're not interested in. They can also have trouble reading facial expressions, body language, gestures, or tone of voice. While typical children learn these skills by observation and imitation, many kids with autism need to be specifically taught to pick up on social cues. Lacking these skills can cause other kids to misunderstand them and view them as rude or aloof, which makes it difficult to make friends.

Autism-Help.org details how a child with autism's inability to interact in socially acceptable ways can lead to bullying or avoidance from other kids. High-functioning kids often want to be social, but don't know how. They may be very literal, and have trouble recognizing sarcasm, or they might be perceived as being overly critical or bossy. While social skills don't necessarily come naturally to kids with autism, they can be taught, and drama therapy aims to teach these skills in a fun, enjoyable way.

And Corbett's not the only one who believes in the power of theater to help kids with autism. Drama programs for kids on the spectrum are cropping up all over, and many were even started by parents who were frustrated that traditional classes wouldn't admit their kids. Anna Villa-Bager of New Jersey founded MarbleJam Kids in 2007, according to The Atlantic, after her daughter was turned away from her local elementary school's arts program. MarbleJam Kids now serves over 120 children, providing art, music, and movement therapy. The classes, led by trained therapists, use role-playing exercises to help kids navigate the right way to respond to real situations they've experienced at school.

Imagining Autism, a program based at the University of Kent, found that every child who participated in their pilot program improved on one or more of the measures they studied: social interaction, facial expression recognition, and emotion recognition. The majority of the children maintained or even increased these improvements when psychologists followed up with them up to a year later. Drama appears to be a bridge that can help connect kids with autism to their neurotypical peers, and if nothing else, it sounds like a blast for the kids. More studies will need to be done, of course, but in the mean time, there's no reason not to give it a try.