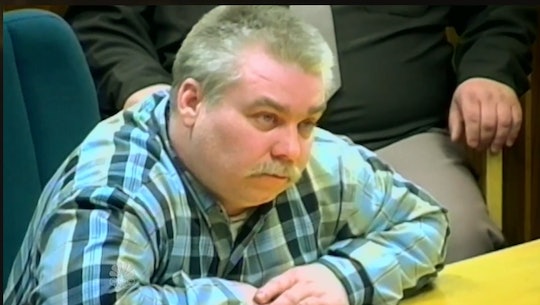 Two weeks ago, the stars of the Netflix docu-series, Making A Murderer, were brought back into headlines when a Wisconsin judge called for the release of Brendan Dassey. Dassey's uncle, Steven Avery, is still in prison for the alleged murder of photographer Theresa Halbach — but a new motion, filed by Avery's lawyers, could give evidence to prove otherwise. The request for new DNA testing, which was filed on Friday, begs the question — could forensic tests free Steven Avery?

According to ABC News, the motion filed asks for "post-conviction testing of physical evidence." In the full 45 page motion, Avery's attorneys state that Avery is willing to pay for "the most comprehensive, thorough, and advanced forensic testing ever requested by a criminal defendant in the State of Wisconsin." The reason for wanting the testing? "...He is completely and totally innocent of the murder of Theresa Halbach."

The motion asks for bodily fluid testing, radio carbon testing, and DNA testing on both previously tested and un-tested pieces of evidence. This request for rigorous testing, according to the document, is due to the fact that "considerable progress has been made in forensic DNA methods, procedures, and tests, including the development of tests for the specific detection of blood, saliva, semen and urine." The last time Steven Avery was on trial was in 2007, when he was was sentenced to life in prison without parole, according to ABC News.

It is possible for forensic testing to clear convicted felons. According to Forensic Science Technician, there have been numerous felons that were exonerated due to DNA testing. Therefore, the potential results of extensive DNA testing could quite possibly clear Avery, depending on the results.

However, just because the motion was filed doesn't mean that the testing will begin immediately. According to Newsweek, the Wisconsin Department of Justice will have to respond to the motion first and could possibly fight Avery's attorney, Kathleen Zellner, for access to the evidence.

"No guilty person would ever allow for such extensive testing to be done," Zellner, said to press standing outside of the Manitowoc County Courthouse on Friday. "The fact that Mr. Avery has agreed to all this testing is further proof that he's actually innocent of these crimes."

According to the Post-Crescent, a newspaper based out of Appleton, Wisconsin, Zellner told reporters that "testing has already been completed on items that Avery's attorneys did not need to request access from Calmut County." Zellner did not respond to Romper's request for comment.

If the court allows for the new testing, this could potentially provide a huge break for Steven Avery.