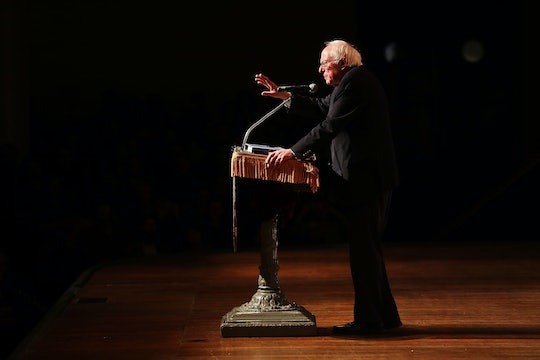 Free College Could Still Happen, Thanks To Bernie

On Tuesday morning, Vermont Sen. Bernie Sanders and New York Gov. Andrew Cuomo announced their proposal to offer free college tuition to any students in New York state whose families make less than $125,000. Making college free was a huge pillar in Sanders' campaign last year for the Democratic nomination, and it's clear that he still intends to make a difference in that regard. But could free tuition still happen with Trump as president? It might not happen nation-wide right away, but Sanders seems determined to see free college tuition instated state by state, with New York leading the way.

The proposal Cuomo and Sanders announced is called the Excelsior Scholarship, and it would cover any students accepted into state or city universities in the state of New York whose families earn less than $125,000 per year. Nearly 1 million families in the state would qualify, making the implications for education in the state staggering.

"College is a mandatory step if you really want to be a success ... and this society should say we're going to pay for college because you need college to be successful," Cuomo said on Tuesday morning, according to NBC. "Other countries have already done it. It's time this country catches up."

In order for the Excelsior Scholarship to become a reality, it will require legislative approval of a program that could cost New York an estimated $163 million a year. According to The Journal News, Cuomo's office has until Jan. 17 to present his budget plan, and state legislature would have to approve it as part of the budget for the fiscal year, which starts in April. The scholarship would be rolled out over three years, beginning this coming fall and taking full effect by 2019.

"The issue is that, at a time when we have a president-elect who thinks it's a great idea to give hundreds of billions of dollars in tax breaks to the top two-tenths of one percent, we have a better idea. And that idea is to make public colleges and universities tuition-free for every person in New York state, in Vermont, and in America," Sanders told a cheering crowd on Tuesday morning. He continued:

What Gov. Cuomo is proposing is a revolutionary idea for higher education, and it's an idea that's going to reverberate not only throughout the state of New York but throughout this country. ... And here is a prediction that I make. In urging the New York state legislature to follow the governor's lead, to pass this legislation, here's my prediction: if New York state does it this year, mark my words, state after state will follow.

By focusing on a single state, politicians in favor of free college tuition should be able to instate higher education programs more swiftly and with less opposition. And if Sanders' prediction is correct, once one state does it successfully, others will quickly fall into step, which is great news for coming generations of college students.