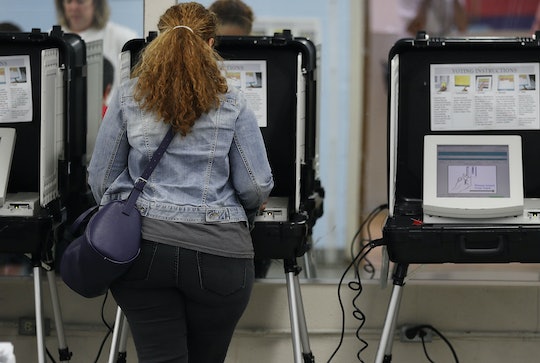 Could Georgia Become A Blue State?

On Tuesday, all eyes in the United States were on Georgia as voters headed to the polls in a special election to replace Congressman Tom Price with a new representative for the state's 6th Congressional District. The district — made up of three Georgia counties — has been a Republican stronghold for decades now, but Democrat Jon Ossoff's campaign has raised more than $8.3 million and polled above 40 percent consistently, according to The Guardian. Some are wondering what an Ossoff win would mean for the 6th — and for Georgia as a whole. Could Georgia become a blue state, or is this possible political flip limited only to the 6th?

More Like This
Kate Middleton Wore A New Diamond Necklace In Her Anniversary Photos
Florida Homecoming Queen Accused Of Rigging Votes With Mom
15 Of Chrissy Teigen’s Best Quotes On Motherhood
Apple Card Family: How It Works & What Your Kids Can Learn

For now, only Price's seat is up for grabs, but 2018 isn't far off — and then all members of the House of Representatives will have to defend their seats at the table. According to GovTrack, Georgia is made up of 14 districts: nine of those are currently represented by Republicans while four have Democrats at their helms. The state is still mostly red, but if Ossoff wins the 6th's special election on Tuesday, it could be a sign of changing times for the state.

Ossoff's popularity alone seems to prove that a rising tide of Democrats are coming out of the woodwork in Georgia, and Democratic nominee Hillary Clinton's unprecedented popularity in the state during the 2016 elections gave many Democrats hope as well. Of course, President Trump still won Georgia, but by only 50.4 percent to Clinton's 45.3 percent, according to The New York Times. (That's a smaller gap than Mitt Romney's 2012 win in Georgia, in which he led by 7.8 percentage points.)

According to some experts, Georgia is already primed for a switch, thanks in part to an increase in African-American residents in the state. Many of them are also part of the middle class and well-educated, according to Georgia's House Minority Leader Stacey Abrams.

"Demographics are moving in the right direction for Democrats," Charles Bullock, a political science professor at the University of Georgia, told the Hill in October. "In terms of new worlds to conquer it’s close to the top of their list. By 2020, we’re probably talking about it as a traditional battleground state."

Another thing to take into account is Trump's falling approval ratings. The latest Gallup poll shows 53 percent of Americans disapprove of how Trump is doing as president; only 41 percent are actually fans. If Ossoff wins in Georgia's 6th Congressional District, it could be a sign that those disapproval ratings are affecting other Republicans, as well. That, combined with an increase in first-time political activism from Trump opponents, could change the red tide in Georgia.

"The intensity at the grassroots level here is unprecedented," Ossoff said in a campaign office recently, according to CNBC. "It's got very little to do with me, and everything to do with the times that we're living in and the kind of community this is."

The battle for a Democratic 6th isn't won yet, however — and many Trump opponents are looking for a victory in the district as a sign that things might change for the better for Democrats across the country. So if you're living in any of the counties represented in Georgia's 6th Congressional District, get out and vote Tuesday.