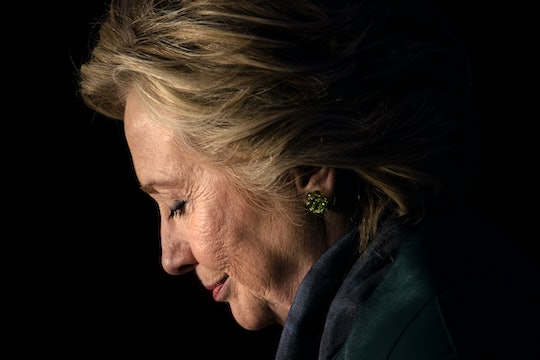 Could Hillary Clinton Go To Prison For The New Email Developments? Here's What We Know

Just when voters thought the "October surprise" was going to be GOP candidate Donald Trump's "P*ssygate" fiasco, Federal Bureau of Investigation Director James Comey dumped an unwelcome October surprise of his own on Democratic candidate Hillary Clinton Friday afternoon: A vaguely worded letter to the congressional committees involved with Clinton's private email server investigation about the existence of additional emails "pertinent" to the investigation. Could Hillary Clinton go to prison for the new email developments? Comey's letter came as a surprise not only to the Clinton campaign, but to other officials on Capitol Hill, with just eight days until the presidential election. The Clinton campaign did not immediate return Romper's request for comment.

First, it's important to lay out the framework that led up to Comey's letter: In March of last year, The New York Times broke a story about Clinton's use of a private email server during her tenure as the U.S. Secretary of State. In July 2015, at the behest of the inspector generals at the State Department, the FBI launched a probe into Clinton's email servers. Comey publicly stated this past July — after a year of investigation — that the FBI had concluded its investigation into Clinton and recommended she not be prosecuted. U.S. Attorney General Loretta Lynch accepted the FBI's recommendation, announcing that Clinton would not face criminal charges. Given all of this, where does Comey's latest letter fit into the larger narrative? Here's what we know.

When news first broke Friday afternoon of Comey's letter to Congress, the internet exploded with speculation — and, to some degree, rightfully so: The letter was heavy on implication and rather sparse on specifics. Here is the most controversial — and confusing — portion of Comey's letter:

In connection with an unrelated case, the FBI has learned of the existence of emails that appear to be pertinent to the investigation... The investigative team briefed me on this yesterday, and I agreed the FBI should take appropriate investigative steps... to determine whether they contain classified information, [and] to assess their importance to our investigation.

Due to the vagueness of Comey's letter, there has been wide interpretation by some about what his letter means for Clinton — but sticking just to the facts of the letter itself, Comey did not say that the FBI investigation into Clinton's emails has been reopened. The letter also did not state that these emails were deliberately hidden by Clinton or the State Department during the FBI's investigation this past year: They were discovered during the current investigation into Anthony Weiner — a former New York Senator and estranged husband of Clinton's longtime aide, Huma Abedin — and his alleged online sexual relationship with a 15-year-old girl. (Weiner could not be reached for comment.) Most importantly, Comey's letter did not make any recommendations whatsoever regarding Clinton or criminal charges.

Then There's Comey's Other Letter

Of course, we don’t ordinarily tell Congress about ongoing investigations, but here I feel an obligation to do so given that I testified repeatedly in recent months that our investigation was completed. I also think it would be misleading to the American people were we not to supplement the record. At the same time, however, given that we don’t know the significance of this newly discovered collection of emails, I don’t want to create a misleading impression.

What's most important to note is that Comey and the FBI literally "don't know the significance" of what's in those emails — and yet, many of Clinton's harshest critics have already assumed that they contain evidence of criminal wrongdoing. The fact is no one knows — and it is the FBI's duty to review those emails accordingly.

What Does Comey's Letter Mean For Hillary Clinton?

The short answer: No one knows — including Clinton or her campaign. The Clinton campaign was quick to respond to the news of Comey's letter Friday night by releasing a campaign video featuring press secretary Brian Fallon. In the video, Fallon said, "We're beyond confident that there is nothing at issue here that would be cause to revisit the decision announced back in July."

Fallon also noted that Republicans have been using Clinton's email investigation as a campaign strategy of their own, but that it's a distraction that hasn't fooled voters — but to be honest, that statement is pure Clinton campaign spin: While Comey's letter about the newly discovered emails may not have any criminal implications, it certainly has affected Clinton in the polls. Will Clinton go to prison over these new emails? No one really knows right now — and Comey must provide clarity. But one thing is for certain: Comey's letter could cost Clinton the presidency with just over a week to go, and that's something he had to have known when he wrote it.