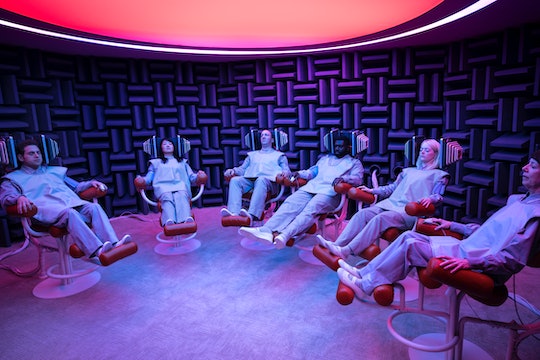 The Alternate Reality On 'Maniac' Is *Really* Terrifying

In the "retro-futuristic" new Netflix series, Maniac, we meet Annie and Owen (played by Emma Stone and Jonah Hill), two lost souls in need of a cure for their emotional and mental traumas. The answer comes via Justin Theroux as Dr. James K. Mantleray who promises a remedy for all of this needless pain: three pills in three days, with no consequences or side effects. The notion sounds lovely, but could Maniac really happen and if so, would Justin Theroux be part of it?

According to Independent UK, creator Patrick Somerville says it's unlikely the events in Maniac could really happen because "nothing that is going to be effective in making people feel better is going to be easy.” The idea of taking a pill for three days to erase past pain is an interesting one. When posed with the question of 'would you take it?' Somerville admits he would not, based on what they've written for the show.

The mind-trip dark comedy, which premiers Friday September 21, takes viewers on a visceral thrill ride. Annie and Owen, along with 10 other participants, agree to take the pills in exchange for a pain-free life. But that's not what happens because — spoiler alert! —it'd be a boring show. What you get instead is a story that is "split into 10 chapters, with episodes of varying lengths," according to Digital Spy. Maniac is based on the 2014 Norwegian source material of the same name from the minds of creator, Patrick Somerville and writer/director, Cary Fukunaga — both known for stellar resumes. If flashing neon lights, dream-like sequences, and the Stone-Hill reunion you've been waiting for since 2007 (which is enough for me, TBH) are your thing, so is Maniac. Trust.

In the series, Annie and Owen are coerced into dream states...or are they? The "dreams" are hard to differentiate from reality and are shown through hypnotic scenes. Annie and Owen re-live a painful memories as themselves and again as someone else. All of this sort of belies the "no side effects" promise, Doctor, but if we look at the facts, these things could technically happen with the right hallucinogenic. The allure of having all your problems solved in such a short time by taking a few (non-FDA-approved!) pills named U.L.P isn't lost on Annie or Owen as they explore their fears in dizzying array. I don't know about you, but to me all of this sounds pretty terrible to live (but awesome to stream).

The premise of the series pinpoints a human struggle with mental health and anxiety. “It’s normal to not feel normal," Stone told Independent UK. "[When you’re] dealing with stuff internally, to reach out and connect with people is vital. In this day and age, we tend to isolate ourselves under the guise of connection. We kind of have our own bubbles that we can live in, but it’s important to reach out, and rely on each other.”

In an interview with Elle, Stone addressed what drew her towards Maniac. “The thing I liked about Maniac was that it’s about people who have their own internal struggles and are trying to fix them with a pill,” Stone said. “But you see over the course of the show that human connection and love is really the only thing that gets us through life. I liked that idea.”

Indie Wire calls Maniac "the most anticipated show of 2018," perhaps because everyone can identify with struggling with their mental health on some level. But if Maniac ever did happen IRL, let us use each episode as a guide of how to make it through (and what not to do) as a result.