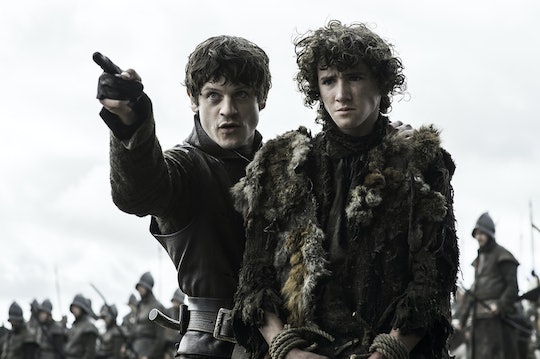 Could Melisandre Bring Rickon Back On 'Game Of Thrones'? She's Done It Before

Rickon Stark is probably the only Stark kid to have been of such importance that he didn't need to speak at all during Season 6 of Game of Thrones. That's right, the poor kid who had been gone for like four seasons was finally reintroduced and given zero lines for the entire season. But he proved to be the key to igniting the Battle of the Bastards, so could Melisandre bring Rickon back? We all know she's succeeded in doing it before with Jon, but that was a special case. He is said to be special, and useful for the wars to come in Westeros. Rickon, on the other hand, doesn't serve much purpose other than a rightful heir to Winterfell.

More Like This
25 Great Sci-Fi Movies To Watch As A Family
Kate Middleton Talked About Baby Lilibet & Fed Some Rabbits While Meeting Jill Biden
Angela Kinsey's Daughter Dressed As Her Character From 'The Office' & Wow, The Sass!
Ridley Jones Will Introduce Netflix’s First Nonbinary Character In A Preschool Show

Bran is still off doing God knows what, hopefully getting close to the Wall, and Jon is a Snow. Or, a Targaryen, depending on what fan theories you believe. But other than losing a male heir of Winterfell, Rickon dying on Game of Thrones was entirely necessary and his resurrection won't help anyone at this point.

When Melisandre brought back Jon Snow, it was because, as she'd said, the Gods required it of her. They wanted him back. In her eyes, he is The Prince that was Promised, a.k.a. super important for the future of the Seven Kingdoms. Rickon, on the other hand, isn't a warrior or leader and was still very much just a kid when Ramsay shot that arrow through his chest.

While it would be great to be able to take back that sad death from Sunday's episode of Game of Thrones, it was better than the alternative. I.e., Sansa or Jon getting killed by Ramsay Bolton. Could Melisandre bring back Rickon on Game of Thrones? She probably could, given that she's the resident Red Priestess of the North, but there would be no point to it. These are just a few reasons why Melisandre likely won't be performing another resurrection.

Bringing Back Jon Was Different

Melisandre brought back Jon Snow because she knows of his supposed importance in Westeros. He wasn't just another casualty, bur instead someone who would serve and help the people better alive than dead. Rickon, on the other hand, was just a kid. A sometimes forgotten and often looked over Stark kid, whose death was plenty sad but that's about it. If Melisandre brings back Rickon, then by that logic, she should bring back all of the dead children of Westeros.

Rickon's Death Started The Battle Of The Bastards

If Ramsay taking Rickon prisoner is what finally got Jon and Sansa motivated to take back Winterfell, then his death is what started the fighting of the Battle of the Bastards. The two armies would have eventually charged at each other anyway, but Rickon's death, right before Jon could save him, was the perfect tool in setting Jon off in anger and rage.

Melisandre Apparently Only Does What The Gods Tell Her

When Jon tells Melisandre not to bring him back, should he die (again) in the Battle of the Bastards, she basically tells him to preach to someone else because he's not the boss of her. Should the Lord of Light show her that Jon needs to be brought back, she would do it again. Call me crazy, but I don't see the Lord of Light telling her to bring back a random kid. Especially, when Melisandre was also told to burn one alive. So yeah, there's that.

He Was Going To Die In Some Way Anyway

It was Cersei who once said, "In the game of thrones, you win or you die," and that is painfully true. So it should also be noted that if you're a player on Game of Thrones, you should also be strong enough to handle anything that comes your way. Which means that there is no place for weak or scared people. Sansa has lasted this long because she's a survivor, and eventually became the strong politician of sorts that she is now. Rickon was still just a kid, and one who could do nothing to protect himself. He would have eventually found himself killed in another way.