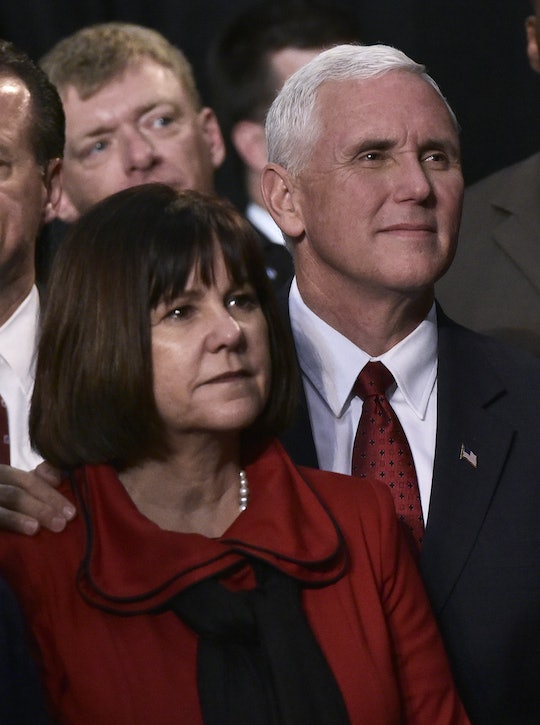 Could Mike Pence Mandate Conversion Therapy Or Fund It? He Supports The Dangerous Tactic

People across the country have engaged in protests since president-elect Donald Trump won the election. Countless Americans have expressed real concerns about what a Trump presidency will bring — considering he has used discriminatory rhetoric about marginalized groups throughout his campaign. But Trump isn't the only concerning person in his ticket, his running mate Indiana Gov. Mike Pence, has also given people cause for concern. Pence's stances and history with women, immigrants, and the LGBTQ community are worrisome. One particularly striking concern that many people have brought attention to this election cycle is conversion therapy and Pence's supposed support for it. Could Mike Pence mandate conversion therapy or fund it? It's a scary thought to begin with.

Romper has reached out to Pence for comment regarding his previous and current stance on conversion therapy and is waiting for a response.

As the American Psychological Association (APA) explains it, conversion therapy, "refers to counseling and psychotherapy to attempt to eliminate individuals’ sexual desires for members of their own sex."

Aside from its practice being a direct attack on one's identity, as LiveScience reported, research continues to show it goes directly against science, and has dangerous effects on one's health, like depression, anxiety, and suicidal thoughts. President Obama has condemned the practice and called for an end for its therapies for youth, and Hillary Clinton has also expressed her support to ban conversion therapies during her presidential campaign.

As for the future of government action for conversion therapies, it's unclear. States like California, New Jersey, and Oregon have banned conversion therapy on minors, along with Washington D.C, and Illinois. Lawmakers in other states like Pennsylvania and Vermont have introduced legislation to ban the practice.

As for a ban on a federal level, members of Congress have urged the Federal Trade Commission to put an end to this practice. And, as the Daily Beast reported, Democratic California Rep. Ted Lieu introduced a bill proposing a nationwide ban on conversion therapy. So, efforts to ban the therapy on a federal level have been, and can certainly be made – but with a Trump and Pence leadership, and with a Congress under Republican control, only time will tell where efforts concerning conversion therapies will go.