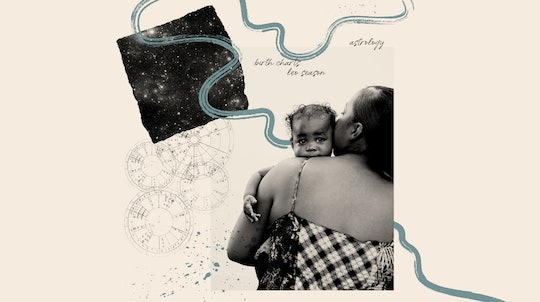 You Cannot Tell A Leo When To Be Born

“I really hope my future child is not a Gemini,” I used to joke with friends. When I found out I was having a baby last year, the reality of a child I had daydreamed about for so long was overwhelming. I was a bit nervous when her due date put her firmly in Leo season — my family already had too many Leos, I was sure. I thought of my older sister. A classic Leo, drama is her literal bread and butter — she’s a playwright. Her child, my niece, loves to declaim, “I don’t need a Halloween costume. I’m going as myself.” My child’s father is a Leo and has never gone to a party, no matter how awkward, that he did not like.

And then she was actually born two weeks early, still a Leo, but the day after her father’s birthday. My daughter’s birth was tough — an unplanned induced labor stretched over the course of four days, sparked by an ultrasound that revealed a too-thick placenta, I was told. “If you leave the doctor’s office now,” the technician said, “she could lose oxygen in your womb and you wouldn’t even know.”

Our doula had other plans. “You should go home and take a shower and prepare yourself for checking into a hospital,” she said. I was in unchartered space, where ideas of what might happen next were determined by intangibles — the anxiety of an attending nurse; the inherited wisdom of a doula; the guesses of doctors and attendants.

But the whole pregnancy had been difficult to map. I had moved twice; written a novel; my then-husband had been laid off and I’d had to negotiate health insurance for all of us three separate times. Every time I felt another upheaval begin, I would tell myself, “This is bad. But. Just keep going. You can relax, you can celebrate, you can sit around and do nothing in the last month of this pregnancy. You can just focus on your baby and being pregnant then.” I’d left all the good things about a pregnancy for that time — the nursery decoration and the ironing of baby clothes and the unboxing of toys. And there I was, during the time I had planned to enjoy all of that, in a windowless room in the hospital’s “ward extension,” connected to a monitor with a less than three foot lead, unable to even walk around because the nurses told me that any movement would lose the connection to my baby. Every slight movement was tracked, down to the millimeter, but I was adrift from the wider world. I couldn’t even see the sun or the stars. I was in another dimension, one where things hovered, where everything was just about to happen, but it was still unclear, and there was no way to tell, if the thing happening was good or bad.

Even with my doula and my daughter’s father there, I spent many hours in that room alone. The room’s thick walls blocked any cell reception so I couldn’t talk to anyone on the phone — not that I would want to. I had entered birth time, that strange state where things move incredibly slowly and then suddenly very fast. Doctors spent days discussing what to do next, then what felt like five minutes settling on a solution: to stick a balloon up my cervix and inflate it. It was disorientation on top of a pregnancy full of emotional instability, made stranger by the fact that during those four days, I wasn’t allowed to eat — the doctors kept insisting they could bring me in for a c-section at any moment.

In that hospital room, back in the land of emotional peaks and valleys, I kept checking, over and over again: would my daughter be born on a good day?

I could still access Wi-Fi on my computer, and sent what I hoped were charming, off the cuff emails to editors (”Sorry I haven’t filed! I’m currently in labor (winky face)”) that I now realize read more as deranged. Then pulled up any site I could find — Cafe Astrology and Jennifer Angel and Astorstyle and of course the great astrologer Chani Nicholas — that might offer me some sort of reassurance.

I first loved astrology for its sense of control. I remember getting a pop-up book of astrological signs from Urban Outfitters as a middle schooler. It cost forty dollars and up until that point was the most I’d ever spent on a book in my life — as such, I treasured it and took it very seriously. My sign’s page, Scorpio, was an elaborate pop up of a graveyard, with skeletons dancing at the ends of push tabs and swinging doors cut into paper tombs to reveal red cartoon hearts. At that point, I was used to having a very different inner life than what people projected onto me. Chalk it up to growing up Black in predominantly white neighborhoods and going to a nearly all-white private school as a scholarship student. When you are a dark-skinned, chubby Black girl with dreadlocks, you get a lot of people of all races telling you how queenly you look, how strong you must be, to please stop being so intimidating when you are literally just staring off into space and daydreaming about the ocean or something. As a middle schooler, it was easier, it hurt less, to assign this disconnect to the fact that I was a Scorpio than to sift through the weight of four hundred years of racialized violence.

As an adult, the illusion of control grew. Back when I worked in the chaos of corporate America, it soothed me to check my horoscope each morning to see if that day’s business would go “poorly,” “good,” or “excellent.” If the horoscope told me it would be a poor business day, I would feel an odd sense of calm when I walked into the office and was told to prepare to lay off a third of my team and could I also get on a plane and fly to L.A. to shoot a video with Chadwick Boseman? Unable to emotionally process those wild swings of fortune, I convinced myself that astrology was better than therapy. It would take me a few more years to realize how wrong that was. So in that hospital room, back in the land of emotional peaks and valleys, I kept checking, over and over again: would my daughter be born on a good day?

All those doctors finally decided to perform the c-section on a Thursday evening. Suddenly, I was moved off my hospital bed and brought to the operating room. Up until the moment she emerged, I wasn’t altogether sure this was really happening. And then there she was. They gave her to her father to hold and he held her up for me to see . We stared at each other, then she was gone again.

'Help!' I wrote to her. 'My daughter has so many planets in the eighth house and I’m just so scared. I’m scared I’ve given birth to her only to suffer.'

During recovery, I made sure to text her birth time to myself. When we were finally allowed home, I put her information into an astrology calculator and up came her birth chart. She was a Leo, this was true, with a Taurus moon and Capricorn rising. Her sun was in my house — the eighth house, of trauma, pain, mental illness, darkness, ghosts. Spooky shit. Stuff I loved as a Scorpio but I could not imagine, did not want to imagine, this perfect, pure baby going through.

I messaged Chani, the astrologer I admire the most, because she is such a beautiful writer, but was also, for many years, one of the few popular astrologers who actually liked Scorpios. Everyone else wrote about us as if we were demons.

“Help!” I wrote to her. “My daughter has so many planets in the eighth house and I’m just so scared. I’m scared I’ve given birth to her only to suffer.” To her credit, Chani wrote me back immediately, even though she was in the middle of a book tour. She told me not to worry. That she hears this from parents constantly. That these placements don’t necessarily mean my daughter will live a life marked by madness or sadness. “She’ll be drawn to those things,” Chani told me. “She will be able to withstand talking about them. She may be a great healer for others.”

I want my daughter’s future to be limitless. I want my daughter to know herself so well, she can’t be shaken from this self knowledge by others. I do not want her to delay her own happiness and calm for some other, better time that probably isn’t coming. I want, in short, for my daughter to do better than me. It’s what every parent wishes for. I would like to believe that the stars can tell me what type of person my daughter will be, can let me know all the pitfalls she can avoid, can tell me what ideas I should protect her from. But I know that asking her to live her life reacting to the equations of the universe won’t necessarily bring her this certainty.

I try not to read her horoscopes now. They are pretty irrelevant at this age anyway, but I don’t know how easy it will be as she grows up. When I find my anxiety spinning out, trying to game out what my daughter’s future will look like, I try to remember Chani’s words. “I don’t believe in astrology,” she’s said. “It’s something that’s functional… It helps people be seen.” I try to think of my impulse that way. That reading the stars is a chance for me to slow down, to not live in the space of “if this then that.” That it will help me see my daughter in the here and enjoy her in the now.

A month before I got pregnant, Chani sent me a message to tell me that the Jupiter transit we were all about to experience would pass over the fifth house. The house of creativity, abundance, fertility, and children. I loved the romance of that, the story that said my daughter had been written in the stars. I will tell her this story as she grows, but hopefully not as a prescription. If only to give her a feeling of grace and grounding, when the world beneath her feet begins to roil.

More Like This
It's A Beautiful Day In Jenny Slate’s Neighborhood
Activist Imara Jones On Raising Kids Who Celebrate Black Trans Identity
Chris “Ludacris” Bridges On Creating The World He Wants For His Daughters
How Do I Rediscover My Sexuality When I’m Completely Touched Out?

This article was originally published on July 21, 2020