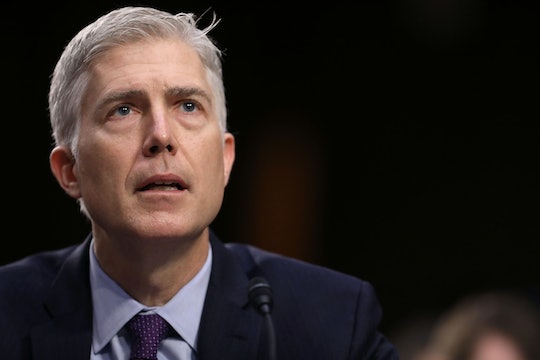 On Tuesday, federal judge on the Tenth Circuit Court of Appeals Neil Gorsuch began the second day of his confirmation hearing as President Trump's Supreme Court nominee. While Trump made promises in the past to appoint a judge who was "pro-life" in order that Roe v. Wade might be overturned, whether Gorsuch fits the bill remains to be seen. While he's said he won't overturn Roe, could Neil Gorsuch ban late-term abortion? The "workaround" for making abortion illegal throughout the U.S. has been making headlines.

The Supreme Court decided on the landmark Roe v. Wade case in 1973, making abortion legal on a federal level (whereas before, it had been up to each state individually whether they would criminalize it). Since then, plenty of threats to overturn it have been made by conservatives, usually on the basis of anti-choice arguments, but these attempts have been tenuous at best since the decision is protected by the constitution.

That being said, President Trump has already made it clear that he intends to find workarounds to make access to abortion more difficult. One rule he put back into effect would prevent any foreign organization that provides or discusses abortion (which could extend to most any reproductive health clinic) from receiving U.S. funding. Similarly, one of the first provisions of the American Health Care Act would cut funding for clinics that perform abortions — despite the fact that those clinics, like Planned Parenthood, haven't used federal funding for those procedures in decades (except for in cases of rape, incest, or if the mother's life is in jeopardy), and the procedures are a small fraction of the services they offer, according to the ACLU.

At least in the case of overturning Roe, Gorsuch stated during his confirmation hearing that he considers the ruling "precedent," that "has been reaffirmed many times," according to NBC. Gorsuch's comments may imply that he would not vote to overturn Roe, but they don't shed much light on whether or not he would support additional restrictions on abortions.

Trump has said that he'd like to send the decision to criminalize abortion "back to the states," as he told 60 Minutes' Lesley Stahl in his first post-election interview back in November. He also admitted in that interview that to do that would mean some women seeking abortions would "have to go to another state," according to The Atlantic.

Choosing Gorsuch for the Supreme Court seat, then, was part of Trump's plan to surround himself with people who would support these types of restrictions at a federal level. Plenty of states have been working on legislation that restricts abortion access in a multitude of ways: according to the Guttmacher Institute, as of March 1, five abortion restrictions have been enacted in the U.S. this year. One of the most common restrictions appearing in legislation is that of late-term abortion — a term that is not so much medical as it is political, as explained by Talking Points. According to data collected by the Guttmacher Institute, 89 percent of abortions in the U.S. occur in the first 12 weeks of pregnancy. Just 1.3 percent occur after the 21st week, which would be considered "late-term."

In his past political writings, Gorsuch has often debated the concept of personhood, which is at the basis of many arguments about abortion. In his research for his dissertation and later book, Gorsuch wrote: “Abortion would be ruled out by the inviolability-of-life principle I intend to set forth if, but only if, a fetus is considered a human life," according to the New York Times.

Whether Gorsuch himself considers a fetus a human life is a more complicated — yet certainly pertinent — question. Beyond his personal beliefs, he hasn't ruled in any abortion-related cases in the U.S. Court of Appeals for the 10th Circuit in the last decade, according to Amy Howe of SCOTUS Blog. Of the two cases he was involved with, his rulings were split, and neither case involved the constitutionality of abortion.