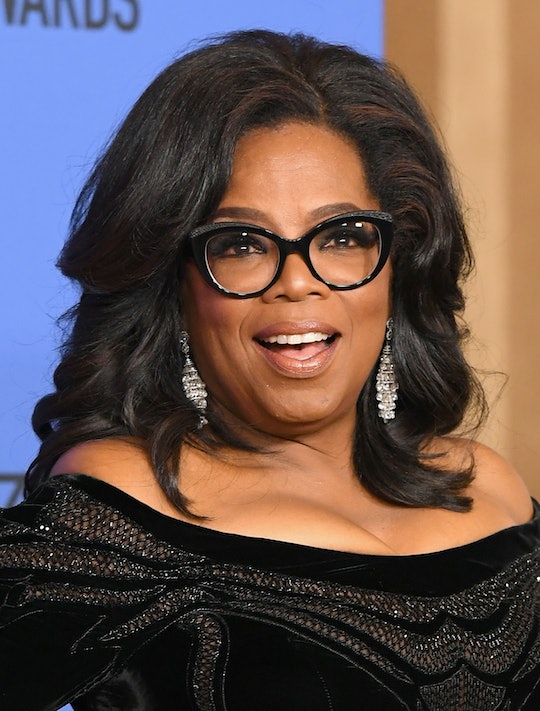 People Are Begging Oprah To Run For President In 2020 — But *Could* She Beat Trump?

On Sunday night, Oprah Winfrey gave a rousing, impassioned speech at the Golden Globes, and the internet instantly flooded with calls for her to run for president in the next election. Sure, many people are taking #Oprah2020 as a joke, but 2016 showed us that anything is possible. So, could Oprah beat Donald Trump for president in 2020 if she actually ran? And more importantly, should she actually try?

Obviously Oprah is amazing. Yes, she's eminently quotable because she loves bread and giving away free cars. But she's also determined and extremely hard-working. (No regular golf retreats for her!) She pulled herself up from nothing, as opposed to inheriting millions of dollars. She's amazing with people, she's smart, she made history as the first black woman to become a billionaire in America, and she looks like she's going to kill it in A Wrinkle In Time.

At the Golden Globes, she gave such a powerful speech about the #MeToo movement while accepting her Cecil B. DeMille lifetime achievement award that many watching were left in tears and/or jumping to their feet. Oh, and it's nearly impossible to imagine her sending out a tweet trumpeting the size of her nuclear button, which is apparently something we have to consider now.

It's safe to say that many out there would prefer President Oprah Winfrey to President Donald Trump. But could she actually beat him in an election?

First, she'd have to get the nomination. The Democratic primary for 2020 is sure to be a crowded field, with all sorts of names already potentially in the mix, such as Bernie Sanders, Kirsten Gillibrand, and even Dwayne "The Rock" Johnson, to name a few. Oprah would have much less political experience than most everyone else running. But that's what happened with Trump in 2016. He went up against a crowded field of seasoned Republican politicians who all ended up canceling each other out. No one took Trump seriously as a threat until it was too late. It's conceivable that the same thing could happen with Oprah.

If she did manage to win the nomination, TIME pointed out that she'd enjoy plenty of free advertising. People love watching and talking about Oprah. She'd be in the news all the time.

And at least as of now, Oprah has a higher favorability rating than Trump does, according to a March 2017 Quinnipiac poll. While 43 percent of respondents had a positive opinion of Trump and 53 percent had an negative one, 52 percent viewed Oprah favorably, and 23 percent viewed her unfavorably. Of course, that could all change once a campaign actually began, and the opposition researchers came in.

The biggest obstacle to Oprah becoming president could be that she doesn't seem convinced she should actually run. Oprah has denied any intentions to jump in the ring before. On Monday, though, two of her close friends reportedly told CNN that she was now "actively thinking" about it. Still, it's one thing to consider a presidential run in the wake of an amazing speech, when the internet is clamoring for more of you. It's another to actually upend your life and go through with it.

And I, for one, hope she doesn't. Trump set a dangerous new precedent, in proving that a celebrity could bypass the more traditional route of running first for governor or the Senate to get some political experience, and instead coast to the highest office in the country on name recognition alone. The constant disorder and bad policy coming out of the White House now should be proof that America's leaders actually do need to understand how government works, and have first-hand experience working within one. It shouldn't be a cue for liberals to just put up their own, better celebrity, even if she is amazing and inspiring, and I want to hang out with her always.

Maybe Oprah could beat Trump in 2020. But also, it's more than enough for her to remain an inspiring entertainment mogul who gives important and groundbreaking speeches, and for America to go back to demanding presidents with actual experience.