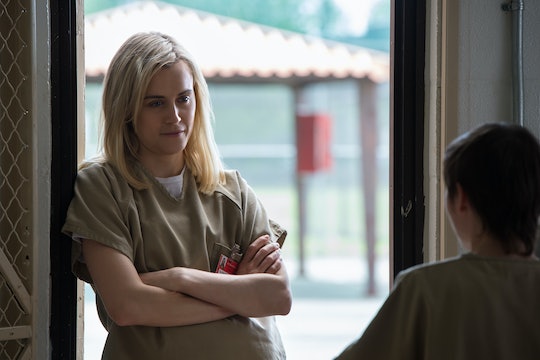 Could Piper Die On 'Orange Is The New Black' Season 4? Fans Aren't Ruling It Out

Piper Chapman has always been a hugely unlikeable and less-than-compelling character on Orange Is the New Black. Thankfully, after Season 1, showrunner Jenji Kohan basically admitted she was mostly just a Trojan Horse to get the series picked up so she could use the show to tell the stories that don't get told: the stories of trans inmates, the stories of women of color, the stories of queer women. Kohan has effectively pivoted away from Piper's storyline since Season 1, which has ignited a fan theory: will Piper die on Season 4 of Orange Is the New Black?

There's never been much story to tell, and all the threads involving Piper have mostly served to infuriate fans more than rally them around her. In Season 3, she started a successful panty-selling business from prison, in which she sold underwear worn by inmates to interested customers on the internet for a huge profit, none of which she shared with, effectively, her "employees." Flaca leads a coup to unionize and Piper fires her to regain power. She also plants contraband in Stella's bunk, leading her to get busted and shipped off to a maximum security facility. Season 3 is definitely the point at which Piper stops giving any f*cks.

But this might be her demise. In an interview with Popsugar Beauty, Taylor Schilling admits that this is going to be "a tough year for Piper," and Selenis Leyva, who plays Gloria on the show, told Huffington Post that "this is the season of the rise of the Latinas and there’s a lot of conflict within that.” It sounds like this could be one possible deadly outcome for Chapman.

In its review of Season 4, TV Guide teases of Piper:

"She finally starts to suffer some significant, realistic consequences for her asinine actions — which, if you can believe it, only amplify in Season 4. And they go far beyond a slap on the wrist or a few days in the SHU. It's a much more believable (and at times, darkly humorous) depiction of what would happen to someone like power-hungry Piper Chapman in a real prison."

Piper has already served out nine months of her year-long sentence, so she can't stick around the prison for many more seasons, unless her sentence gets extended for a crime she commits on the inside. It's possible this altercation with other inmates of Litchfield will lead either to her serving extra time, or possibly her death. Or, Piper could simply be written off the show altogether, leaving us with the characters and storylines we were meant to love from the beginning.