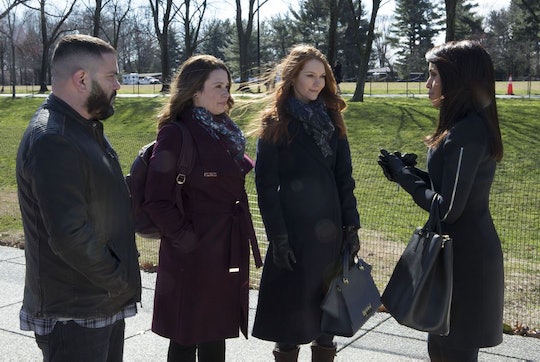 Could 'Scandal' Ever Return? It's Time To Say Goodbye To The Gladiators

It almost seems unbelievable that Scandal is coming to an end, but sadly that's exactly what's happening. After seven seasons of rigged elections, too many murders to counts, and an affair that sparked a lot of conversation, the political drama created by Shonda Rhimes is closing its doors. However, with this being the era of revivals and reboots, it shouldn't be surprising that some fans are wondering: could Scandal ever return?

While one should never say never, especially in the world of television, it definitely seems like this is the end of the road for Scandal. There hasn't been any mention of thoughts on a reboot or revival down the road, and honestly, there probably doesn't need to be. As much as I love Scandal, this isn't a sitcom like most other reboots that are coming back right now. This is a high stakes drama where people are often killed off. Now, leading into the series finale, the top dogs are ready to confess all of their sins and bring down the biggest, and most secret, government organization, B613.

It's hard to imagine how Scandal could ever possibly return, because no matter how the series finale ends, the landscape of this fictional Washington, D.C. will be forever changed. Either Olivia Pope & Co. will all go to jail for their past crimes and bring B613 along with them, or they'll somehow be saved but B613 will most likely be taken down regardless. With B613 out of the picture, it's possible the show could go back to its roots, when Scandal was all about Olivia Pope & Associates taking on clients and Olivia being a fixer, but how would Mellie, Fitz, and even Olivia herself, who passed the torch to Quinn, play into that? It just wouldn't make sense.

Additionally, there's a reason Scandal is ending now as opposed to going on for 14 seasons like Rhimes' most well-known series, Grey's Anatomy. Last year ABC chief Channing Dungey revealed that Rhimes knew how she wanted to end Scandal and that it was supposed to end after these seven seasons, according to Entertainment Weekly. Rhimes told Dungey, "'Look, I really feel like Season 7 is where I want to wrap up this story because I always prefer to end a show where you're feeling on top as opposed to letting things fizzle out.'"

Thus, ending Scandal this way, no matter how the finale ends up playing out, is exactly how Rhimes wanted it to go. Of course, it's totally possible that Rhimes will one day have another idea for how Olivia, or some of the other gladiators, could continue on a new journey, but for now it seems pretty clear that Rhimes sees this as the end of the line for Scandal.

Therefore, fans will just have to accept that this is the end of the road for this politically-driven show, at least for now. That being said, you can always rewatch the the series on Netflix if you're feeling nostalgic about saying goodbye to these characters. While Season 7 hasn't made its way to Netflix yet, you can probably expect it to show up there sometime soon.

For now though, grab your popcorn, some red wine, and a white hat if you have one, and prepare yourselves for the final episode of Scandal. As always fans can probably expect this last episode to be just as thrilling and filled with twists as all the episodes that came before it. That's why this is one series finale you absolutely will not want to miss.