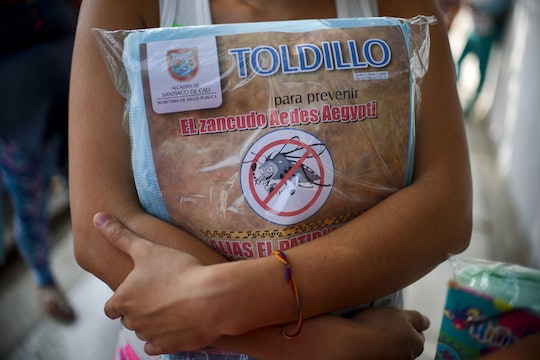 Could The Increased Zika Threat Affect Toddlers? There Are Still Lots Of Questions

Following an admission by the Centers for Disease Control Tuesday that the Zika virus is "scarier" than originally thought, parents everywhere are wondering: could the increased Zika threat affect toddlers? According to BBC News, Dr. Anne Schuchat of the CDC spoke to reporters during a briefing at the White House, and explained that, the more they are learning about the disease, the more concerned they are becoming. One of those concerns? That the Zika virus may have an even more dangerous effect on the fetuses of pregnant women who contract it. According to Dr. Schuchat, Zika could be linked other complications in addition to microcephaly, such as prematurity and vision impairment. So far there has been no evidence to suggest that children who contract Zika after birth will be at an increased risk of health issues above the symptoms that the Zika virus is already known to cause, but given that there still seems to be a lot of information unknown about the Zika virus, it is still certainly unsettling.

The CDC's warning is particularly concerning as warmer weather — and thus, mosquito season — arrives in North America. According to Dr. Schuchat, the Aedes aegypti mosquito (aka, the one responsible for Zika transmission) is thought to be present in 30 states, which is more than double what was originally thought. And while the 346 confirmed cases of Zika in the United States have stemmed from travel, the existence of the Zika mosquito in so much of the country certainly suggests there could be homegrown cases on the horizon.

So what do we know, at least, about the Zika virus and its effects on people other than pregnant women and fetuses? So far, it appears that adults and children who contract Zika are probably not likely to face devastating effects. According to the CDC, the majority of people who contract Zika won't even have any symptoms, and the ones who do are likely to experience relatively mild symptoms like fever, rash, joint pain, or pink eye. Although it doesn't appear that children are at a bigger risk for Zika-related complications (unless, of course, they contracted the virus in utero), there is one toddler and child-specific issue to consider: one of the World Health Organization's suggested prevention methods, using a mosquito repellant spray with DEET, is something that parents need to be careful about.

While DEET has been approved to be safe for children, Kids Health suggests that parents should take precautions when using it. Specifically, parents should, "choose a repellent with no more than 10 percent to 30 percent concentration of DEET," and should aim to use the lowest concentration necessary. DEET shouldn't be re-applied during a 24-hour period, and should also not be used on infants younger than two months old.

Even though the prevailing message seems to still be that, for most people, Zika probably isn't dangerous, according to the Telegraph, there may be evidence that links the Zika virus in adults to nerve disorders like encephalitis and myelitis. This could potentially cause complications like "weakness, numbness and loss of balance and vision, [and] symptoms similar to multiple sclerosis" in adults who have contracted the Zika virus, which would dispute the idea that Zika isn't dangerous for the majority of adults. The neurologist behind the claim, Dr. Maria Lucia Brito, did note, however, that her study was small, and that more research into the possible link was necessary.

The bottom line for parents? Well, experts still don't exactly know. For now, prevention with bug spray and appropriate clothing seems to be the best strategy while scientists and governments try to get a more thorough understanding of just what they are up against.