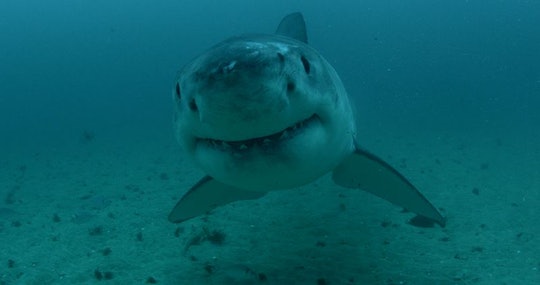 Some Believe A Massive Shark Called The Megalodon Could Still Exist

Every year the Discovery Channel launches Shark Week, devoting day after day to all kinds of shark-related content. In addition to educating viewers about this particular creature of the deep, they delve into myths and theories that have followed sharks for centuries. One such theory concerns the possible existence of a giant, prehistoric shark called the Megalodon. But could the Megalodon really exist, or is it just another legend like the Loch Ness Monster? (No disrespect intended to believers in Nessie.)

Megalodons were reportedly massive, with IFL Science claiming that they were roughly three times the size of a modern day great white shark. The teeth of a Megalodon alone could be at least seven inches long. They would not be the kind of animal you'd like to stumble across during a dark and stormy night, but there isn't much worry of that since they are presumed to be extinct. They were thought to live around 28 million years ago but disappeared 2.6 million years ago during the Pleistocene extinction (a.k.a. the Ice Age), according to IFL Science.

Fossils have indicated that the Megalodon did exist at some point, but they're long gone by now. However, Shark Week has stirred up some controversy in the past for making it appear otherwise.

In 2013, the Discovery Channel aired a documentary called Megalodon: The Monster Shark Lives that showed scientists searching for a 67-foot-long shark along the coast of South Africa. The shark had allegedly killed several humans, and grainy footage of its giant fin seemed to be plausible evidence. But the special was actually totally fictionalized, even though the only indication was a quick disclaimer at the very end. The scientists were actors and no such shark existed.

The faux-documentary was certainly misleading, but the Megalodon was at one time swimming in the earth's oceans. National Geographic reported that the real sharks had "the most powerful bite of any creature that ever lived." Their huge jaws could chomp down on a car with ease, and were possibly stronger than those of a Tyrannosaurus rex. They were thought to hunt dolphins and whales by nipping off their tails and flippers.

Fossilized teeth are the only remains of the Megalodon, but apparently those are more than enough for scientists to go off of. It's been theorized that Megalodons looked like a larger cousin of the great white, but it's impossible to know for sure. National Geographic also offered more information on what led to their extinction. Peter Klimley, a shark expert at the University of California at Davis, speculated that because the Megalodon lived during a time when the oceans were much warmer, they weren't able to survive as the oceans cooled. It's possible they were not able to evolve with changing conditions.

Some believe that the Megalodon swims in the deepest recesses of the ocean to this day. There have even been reported sightings of enormous sharks now and then, though it's hard to speak to their validity. Live Science stated that the National Oceanic and Atmospheric Administration believed 95 percent of the ocean and 99 percent of the ocean floor are unexplored, which is why some might think this breed of shark could still be lurking. But even though the sea has many secrets left to reveal, that doesn't mean the Megalodon is still out there.

The main reason for that is that the fossilized teeth are so old. Sharks shed their chompers regularly, so if the Megalodon existed, newer teeth likely would have been discovered sometime in the last few decades. Megalodons are a fascinating part of shark history, but they remain firmly in the past.