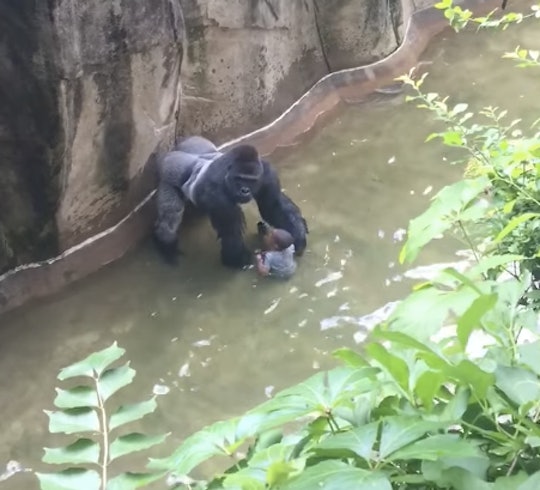 Could The Mother From The Cincinnati Zoo Case Be Charged For The Gorilla's Death?

On May 28, the Cincinnati Zoo shot and killed an endangered western lowland gorilla after a 4-year-old boy fell into its enclosure. The gorilla, a large male named Harambe, took interest in the boy, dragged him through the enclosure's moat, and had hold of him when zoo officials made the decision to shoot him. The incident has sparked intense emotion around the world, and many are calling for the boy's mother to be charged or investigated for child negligence. Considering the outcry, could the mother be charged for Harambe's death?

While some may want charges brought against the zoo or the boy's parents, it's unlikely to happen. According to the Associated Press, Lt. Steve Saunders, Cincinnati police spokesperson, said Sunday that there are no plans to charge the boy's parents. However, Reuters also reported Monday that the Hamilton County Prosecuting Attorney could eventually seek charges against the parents.

Critics have not slowed their call for charges to be pressed, however. On Tuesday, a petition calling for the Child Protective Services to investigate the boy's mother had over 50,000 signatures. "Michelle was not watching her child after the child spoke about 'swimming' in the gorilla enclosure," the petition reads. "Because this mother couldn't watch/control her child, a almost extinct gorilla is now dead."

A Facebook group called Justice for Harambe, which has received over 100,000 likes, also urges its followers to sign a petition to instate "Harambe's Law." The petition was started by Annie Gutierrez, founder of the Gorilla Passion Project, and will be delivered to Ohio state representative Denise Driehaus and Ohio senator Cecil Thomas. In the petition, Gutierrez writes:

To ensure this never happens again, we would like to enact Harambe's Law, that if at anytime this shall occur, the negligent party and or party's be held financially and criminally responsible for any harm and or loss to an animal, specifically when said animal is Critically Endangered.

Others have argued that the incident at the Cincinnati Zoo indicates a wider problem of holding wild animals in captivity. According to WCPO, People for the Ethical Treatment of Animals released a statement weighing in on Harambe's death. "Yet again, captivity has taken an animal's life," PETA Primatologist Julia Gallucci said.

The gorilla enclosure should have been surrounded by a secondary barrier between the humans and the animals to prevent exactly this type of incident. ... Even under the best circumstances, captivity is never acceptable for gorillas or other primates, and in cases like this, it's even deadly.

While it seems unlikely that charges will be brought against the boy's parents or the Cincinnati Zoo for the incident, Harambe's death certainly caused plenty of discussion online, brought commentary on zoos into the spotlight, and highlighted the conservation of western lowland gorillas. Those who still want to take action in Harambe's memory can donate to conservation charities and take their business to see animals in their natural habitats.