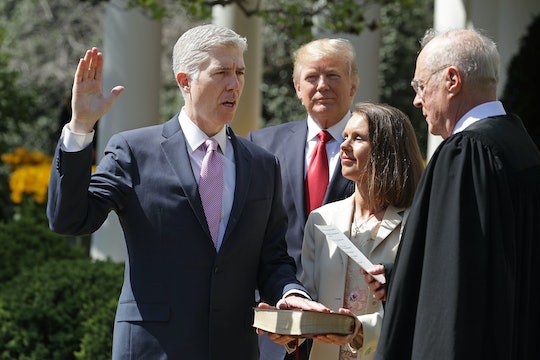 Here's What Would Need To Happen For The Supreme Court To Overturn Roe v. Wade

As if the United States' political landscape wasn't already anxiety-inducing enough, on Wednesday, Supreme Court Justice Anthony Kennedy announced he will retire next month. Reports indicate that President Donald Trump is going to try to appoint Kennedy's replacement as soon as possible — aka before the midterm elections this November — leaving concerned citizens fearful of what could happen. For example, many are wondering if the Supreme Court could overturn Roe v. Wade, the 1973 landmark decision that acknowledged people's constitutional right to make their own medical decisions, including the choice to have an abortion, therefore legalizing abortions in the United States, according to Planned Parenthood's website.

When a Supreme Court justice leaves office, the president holds the sole power of nominating a replacement, which the U.S. Senate must then approve, according to the U.S. Constitution, via the American Bar Association's website. During his presidential campaign, Trump promised to appoint Supreme Court justices who would work to overturn Roe v. Wade, Bloomberg reported. Now that Trump has the opportunity to appoint a new Supreme Court justice, there is a chance that that could still happen. However, Trump's nomination will have to go through the Senate, and by the time the process gets to that point, the Senate just might look a little different. (Hopefully.)

Trump will likely select a conservative to replace Kennedy (who is conservative, but has voted with liberal justices in recent years on key decisions) for a number of reasons. Firstly, when Justice Antonin Scalia died, Trump replaced him with conservative judge Neil Gorsuch. On Wednesday, Trump told reporters that he plans to nominate someone from his previously-released list of potential SCOTUS replacements, TIME reported. The list he released in 2016 featured candidates who were predominantly white, male, middle-aged (meaning they would likely have a long reign ahead of them), and from red or swing states in the middle of the country, USA Today reported.

That being said, Trump's appointment of Gorsuch took quite a while. Scalia died in February 2016 (when President Barack Obama was still in office), and Gorsuch wasn't sworn in until more than a year later, in April 2017, Above The Law reported. If this next appointment takes even half as long as that one, it won't go through until sometime in 2019 — aka after the upcoming midterm elections in November.

Currently, Republicans control the Senate, with 51 Republican seats, 27 Democratic seats, and two Independent seats, according to the official United States Senate website. (While it's not a guarantee, a Republican-majority Senate would be likely to approve of whoever Trump appoints to the SCOTUS.) However, that could all change come the November 2018 election. If Democrats regain control of the Senate, there is a greater chance that the Senate would veto any ultra-conservative person Trump tries to appoint to the Supreme Court.

Despite the year-long process of getting Gorsuch confirmed, Trump seems determined to replace Kennedy "immediately." In a video statement shared to Twitter on Wednesday, Trump said:

We will begin our search for a new justice of the United States Supreme Court that will begin immediately. And hopefully we are going to pick somebody who will be just as outstanding.

While it's hard for me to imagine the government actually overturning Roe v. Wade, there are plenty of Americans who can see it happening. A national survey conducted by nonprofit organization PRRI earlier this year found that 38 percent of Americans "believe that it is at least somewhat likely that abortion will become completely illegal in the U.S. in their lifetime," according to a blog post on Medium by PRRI's Carolyn Davis.

So, what can citizens to do make sure Roe v. Wade is not overturned and that the right to control over your own health care decisions is not taken away? Most importantly, you can vote for candidates who will protect these rights in the November midterm election — click here to register if you have not already.