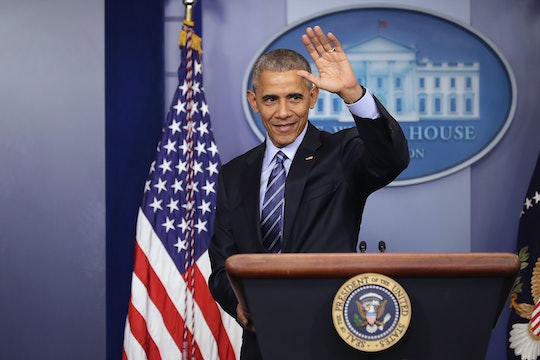 Could The US Hold Another Election?

Since the beginning the 2016 presidential election, it's safe to say there hasn't been a dull moment concerning the election process. One topic that has continued to play a key role in election news is reports that Russia supposedly had a role in influencing the presidential election by allegedly being responsible for the hacking of thousands of emails belonging to members of the Democratic Party and former Secretary of State Hillary Clinton. But with a newly published joint report on Thursday by the FBI and the Department of Homeland Security claiming there's evidence of ways Russia influenced the presidential election, could the U.S hold another election after such reports? All roads still point to Trump's inauguration on Jan. 20.

Trump's presidential victory undoubtedly sparked concerns for many Americans, considering Clinton's significant lead in popular vote. And though there have been continued efforts to stop Trump from entering office after his election victory, like the efforts to encourage electoral college voters to not vote for Trump, there appears to be no indication he won't be sworn into office on Jan. 20 — despite Russia hacking reports.

Russia, and Wikileaks founder Julian Assange, have repeatedly denied allegations that Russia is the source for the hacked emails in question that were released and shared to the public by Wikileaks. Earlier this month, CIA officials who remained anonymous concluded in an assessment published by The Washington Post that Russia interfered with the presidential election with intentions to aid now President-elect Donald Trump.

As CBS cited, the FBI and the Department of Homeland Security released a report on Thursday claiming that there's detailed evidence Russian hackers influenced the U.S election. Clips of the report read:

...This document provides technical details regarding the tools and infrastructure used by the Russian civilian and military intelligence Services (RIS) to compromise and exploit networks and endpoints associated with the U.S election, as well as a range of U.S Government, political, and private sector entities...

...The U.S Government confirms that two different RIS actors participated in the intrusion into a U.S. political party. The first actor group, known as Advanced Persistent Threat (APT) 29, entered into the party's systems in summer 2015, while the second, known as APT28, entered in spring 2016...

With this newly released report, where will American elections go from here? As CBS noted, the report indicates that U.S intelligence officials believes the cyber attacks will continue. A note in the report read: "Actors likely associated with RIS are continuing to engage in [spear phishing] campaigns including one launched as recently as November 2016, just days after the U.S election."

It will remain to be seen how future presidential elections are handled considering the beliefs that Russia allegedly significantly interfered with this election cycle.

Following the 2016 presidential election, and Trump's forthcoming inauguration continues to be critical. But according to Trump it will be anything but a "smooth transition":

"Doing my best to disregard the many inflammatory President O statements and roadblocks," he wrote on Twitter on Wednesday. "Thought it was going to be a smooth transition - NOT!"