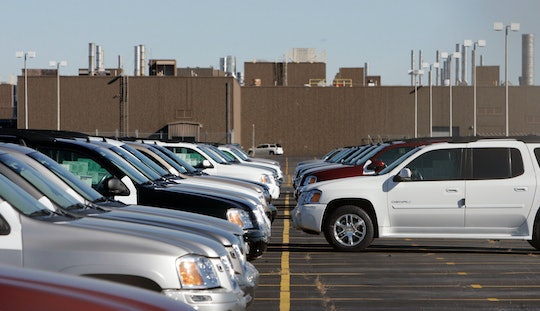 According to Kids and Cars, a safety organization, 37 children die on average in hot cars each year from heat-related deaths, after they are trapped inside vehicles. Laws, bills, and other regulations are constantly being knocked around to try to solve the issue, but it continues to be a concern. But now, one company believes it has the answer. BabySav produces stickers that remind people to check their car for children and animals, to try to prevent a tragic outcome. Could these little stickers be the key to stopping hot car deaths?

Whenever a child dies locked in a hot car, blame gets thrown around. "How could someone do that?," people ask. "Who would leave their kid in the car like that?" But Kids and Cars reported that in more than 55 percent of hot car related death cases, the person who was responsible for the child's death unknowingly left them in the vehicle. "In an overwhelming majority of child vehicular deaths," the organization reported on a fact sheet, "it was a loving, responsible parent that unknowingly left the child."

The organization also reported that unfortunately, in 2017, there have already been 12 child vehicular heat stroke deaths. But Lou Molinari, the President and founder of BabySav, is hoping to change those tragic numbers in the future. As part of its campaign, BabySav released a video on YouTube of one instance in which its product might prevent an unnecessary death. Please be advised, the content, though mild, might be upsetting to viewers.

BabySav produces stickers that read, "Forgetting something? A vehicle's temperature can climb to unsafe levels within a few minutes. Take us with you!" The company reported that these stickers can be placed on the doors of stores and offices, and presumably other public areas, which could help to eliminate a scary situation. In a document sent to Romper, the company stated, "BabySav labels will become a subconscious awareness creating a response to not forget, for any reason."

In an email to Romper, Molinari said:

BabySav is a solution that compliments and fills the gaps of all others.

The truth is, parents and other caregivers really do just honestly forget sometimes that their child or pet is still in the car when they leave it. A Pulitzer Prize winning article by Gene Weingarten of The Washington Post in 2009 described how it can happen, and a majority of the time, it's not a malicious act.

David Diamond, a professor of molecular physiology at the University of South Florida, explained to The Washington Post:

Basically, when you have a daily routine, sometimes your brain goes on autopilot while you perform regular, familiar acts. Something might change, and your memory gets confused. Suddenly, you might think you've done something like drop your toddler off at day care — because you do it every day, at the same time, as part of the same routine — when really, you didn't.

The beauty of BabySav stickers is that they can be put anywhere that might be part of your routine when you're out and about, and remind you, without judgment, to make absolutely sure that you didn't leave anyone behind in your car. Molinari told Romper:

We are bring[sic]ing awareness to the caregiver when they need it most.

The stickers can be put on your own front door, too, because hot car deaths can happen in your own driveway just as they can in a grocery store parking lot.

Other possible solutions to the problem include actions like "Look Before You Lock,” a campaign Kids and Cars recommends that encourages people to check the backseat of their vehicles before they lock their cars. And according to CBS Philly, the HOT CARS Act of 2017 has been introduced in Washington, D.C., and it would require cars to have technology that would alert drivers that someone is still in the backseat when the car is switched off.

Of course, both suggestions are important developments in the struggle to prevent hot car deaths, but BabySav stickers might go one step further. The stickers would act as an unconscious reminder, and not rely on technology or driving habits. Since they can be placed anywhere, their reach is unprecedented.

And any new solution to solve this devastating problem is surely a welcome one.