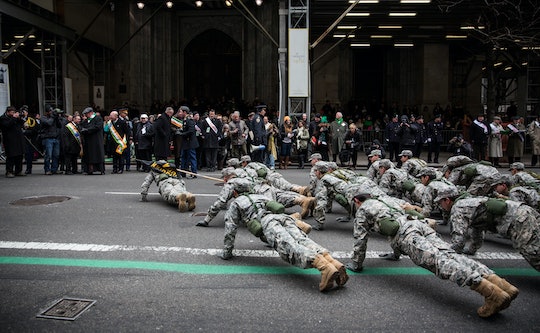 On Wednesday morning, in a series of tweets meant to explain a change in policy, President Donald Trump said the "United States Government will not accept or allow transgender individuals to serve in any capacity in the U.S. Military." His three tweets sparked immediate response, debate, and criticism, leaving many United States citizens wondering, sometimes out loud, "Could transgender people serve in the military prior to Trump's tweet?" Yes, they could, and this change in policy will present a significant, detrimental impact on the entire LGBTQ community.

"After consultations with my Generals and military experts, please be advised that the United States Government will not accept or allow Transgender individuals to serve in any capacity in the U.S. Military. Our military must be focused on decisive and overwhelming victory and cannot be burdened with the tremendous medical costs and disruption that transgender in the military would entail. Thank you."

The painstaking and overwhelming oddity of a president tweeting out a change in how the United States Military operations aside, no longer allowing transgender individuals to serve their country via military service sends a message to the LGBTQ community that cannot, and will not, go unanswered. Especially since, according to The Los Angeles Times, transgender individuals just recently were allowed to serve in the military openly.

In June of 2016, according to The Los Angeles Times, the Pentagon "lifted a long-standing ban against transgender men and women serving openly in the military." The decision, then announced by Defense Secretary Ashton Carter, subsequently removed what The Los Angeles Times described as one of the United States Military's "last discriminatory hurdles and placing gender identity on par with race, religion, color, sex and sexual orientation."

Apparently, and at least according to Trump's Twitter account, that previously removed hurdle is now back in place, pushing the military one step closer to their pre-2011 policies, when it was legal to discrimination against gays and lesbians serving in the military. And while the U.S. Military has never been known for being progressive in any capacity — combat positions were just recently made available to women — this blatant rollback of LGBTQ rights is nothing short of unsettling.

How Trump's "Twitter policy" is enacted by the United States Government at large, or when it will take effect, remains to be seen. The reactions to the news, however, tell us everything we need to know: the man who promised the LGBT community during his presidential campaign that he would "fight for you while Hillary brings in more people that will threaten your freedoms and beliefs" is failing to live up to that promise.