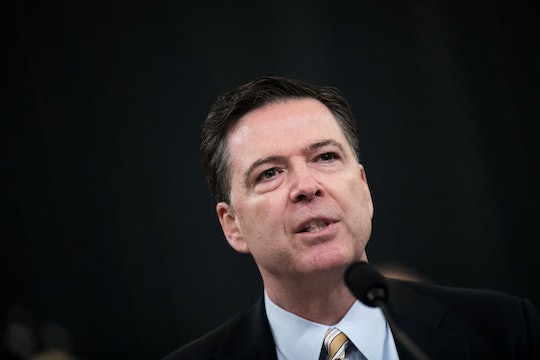 Could Trump Be Impeached For False Wiretap Claim?

President Donald Trump may be continuing to insist that he was wiretapped by President Barack Obama ahead of the 2016 election, but when asked during a hearing with the House Intelligence Committee Monday if Trump's allegation could be true, FBI Director James Comey said he did not have any information to support it. Could Trump be impeached for his wiretapping claim? It's not the first time Trump's comments or actions have raised speculation about impeachment, but as usual, the answer is not exactly straightforward.

According to CNN, Comey testified as part of an ongoing investigation into possible collusion between Trump's team and the Russian government. In his opening statement, Comey publicly acknowledged for the first time that the FBI was also investigating allegations that the Russian government had interfered with the 2016 presidential election, though he emphasized that he would not be discussing details of the investigation. Comey did denounce Trump's wiretap claims though, according to The Guardian, and stated that both the FBI and the Department of Justice agreed that the allegations of wiretapping were unfounded. And when asked specifically by California Rep. Adam Schiff about Trump's tweets on the matter, Comey told the committee that "no individual in the United States can direct electronic surveillance of anyone."

That might be news to Trump, however. The President made headlines Mar. 4 after he accused Obama on Twitter of wiretapping Trump Tower back in October, even going as far as to suggest he was attempting to interfere in "the very sacred election process." This was all despite the fact that a U.S. intelligence report released ahead of Trump's inauguration in January said that Russia had "directed a sophisticated influence campaign including cyber attacks to denigrate Democratic presidential candidate Hillary Clinton and support Trump," according to Reuters, and the fact that numerous investigations of collusion between Trump and Russia appear to be ongoing.

In his attack against Obama though, Trump showed no sign of backing down. In one tweet, he drew comparisons between the alleged wiretap activity and Watergate — the 1970s political scandal that led to an impeachment process against President Richard Nixon, and his eventual resignation. But while Trump may have been trying to insinuate that Obama had acted similarly to Nixon, during Monday's hearing, Schiff suggested instead that perhaps a better comparison would actually be between Watergate and the Russian hacking of the DNC. According to The Guardian, Schiff specifically asked Comey about Trump's reference to Watergate, asking, "[Watergate] was a break-in of Democratic headquarters, was it not? It also involved a cover-up by the president?" He then asked Comey to confirm that Russia also broke into the Democratic headquarters via a cyberattack, to which Comey agreed.

So where do Comey's comments leave Trump? The POTUS has shown no signs as of yet of taking back his wiretapping claims, but as Bloomberg's Noah Feldman argued, an unsupported allegation like that by a president is one that could lead to impeachment. That's because while an allegation like Trump's made by a private citizen would most often amount to a pretty solid libel claim against them, a baseless allegation made by the president is, according to Feldman, "a form of serious misconduct by the government official who makes it." And the only likely way to actually address that misconduct, when it involves the president? Impeachment proceedings.

Texas Rep. Sheila Jackson Lee, for one, agrees. In an interview with The Houston Chronicle Sunday, Jackson Lee said that if Comey were to indeed confirm that Trump's claims were baseless, it would then be possible to argue that Trump's tweets could be considered “high crimes and misdemeanors," which is one of three criteria for impeachment under the Constitution. Jackson Lee said,

If you do not have any proof and you have been saying this for three weeks then you are clearly on the edge of the question of public trust and those actions can be associated with high crimes and misdemeanors for which articles of impeachment can be drawn.

Of course, even with Comey's testimony about the wiretap allegations, impeaching a president is not exactly an easy thing to do. According to Quartz, in order for Trump to be impeached, a majority of representatives would have to vote in favor of it. He would then stand trial in the Senate, where, according to the Constitutional Rights Foundation, "two-thirds of the Senate must vote to convict [him]," based on whether they believe the grounds for impeachment were properly met. Perhaps unsurprisingly then, actual presidential impeachments are very rare: only two — Presidents Andrew Johnson and Bill Clinton — have ever been impeached by the House, and even then, both were later acquitted by the Senate.

The difference at least in the wiretap case compared to previous speculation about a possible Trump impeachment though is that not only did he make such a blatantly outrageous and serious claim, but that he still continues to make it despite what appears to be a clear absence of an evidence. In addition to Comey, Trump's wiretap claims were emphatically (and uncharacteristically) denounced by British intelligence agency GCHQ, according to The Telegraph, after White House Press Secretary Sean Spicer repeated a Fox News claim that Obama had requested the agency to conduct the wire tap. In response, a GCHQ spokesperson called the allegations "nonsense," and "utterly ridiculous." And when asked during Monday's hearing for his own take on the wiretap claim? According to The Guardian, National Security Agency Director Mike Rogers told the committee that he also thought the allegations were false.

What will happen next now that Comey and Rogers have testified? It's hard to say. But it's probably not entirely unreasonable to think that it'll be a good time to keep an eye on Trump's twitter account for a rebuttal.