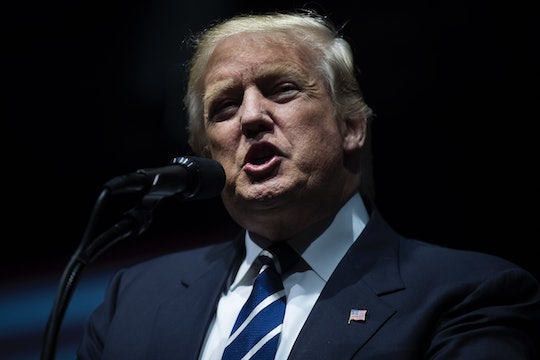 Could Trump Be Impeached If He Was Aware Of Russian Hacking? It's Difficult To Prove

Ever since news broke that the CIA found that Russian hackers leaked Democratic documents to help Donald Trump win the election, there have been some strong reactions. Some are wondering why the media isn't making a bigger deal out of this explosive report, while others aren't even sure if it's real. But for many who are seriously concerned about what a Trump presidency will mean for this country, the main thing they are wondering is whether Trump could be impeached if he was aware of Russia's alleged hacking. Trump's campaign has not responded to Romper's request for comment regarding allegations of treason regarding his ties to Russia.

The New York Times reported that the CIA investigation revealed Russians hacked both the Republican and Democratic Parties during the last few months of the election. However, Russian hackers did not release any of their findings from the Republican National Committee.

"It is the assessment of the intelligence community that Russia’s goal here was to favor one candidate over the other, to help Trump get elected," A senior U.S. official told U.S. Senators, according to The Washington Post. President Obama has ordered a full review of the allegations, CNN reported.

Trump, as well as his transition team, have denied that they were aware of Russian hackers, and have publicly doubted the veracity of the CIA's findings. "I don't believe it. I don't believe they interfered," the president-elect said in an interview with TIME regarding reports that Russians were behind the release of Democratic candidate Hillary Clinton's emails.

Trump's transition team questioned the reliability of the CIA's claims, saying that the CIA "[A]re the same people that said Saddam Hussein had weapons of mass destruction." The Trump campaign did not immediately return Romper's request for comment.

But Trump's denials are a sharp contrast to this past July, when he called on Russia to find Clinton's deleted emails. “Russia, if you’re listening, I hope you’re able to find the 30,000 emails that are missing,” Trump said at a news conference. The Clinton campaign said at the time that Trump was encouraging espionage, which is a federal crime. The U.S. Constitution states that a president can be removed from office for "treason, bribery, or other high crimes and misdemeanors."

A 1974 report was written by the Judiciary Committee after President Richard Nixon's Watergate scandal that explored what acts the authors of the Constitution would qualify for impeachment. Its authors found that "offenses against the government, and especially abuses of constitutional duties" were regarded as such.

The report also included words from the Founding Fathers, and shows that Alexander Hamilton described impeachment as,

those offenses which proceed from the misconduct of public men, or, in other words, from the abuse or violation of some public trust. They...relate chiefly to injuries done immediately to the society itself

If Trump knew Russian hackers were helping his chances in the election, it certainly counts as a "violation of public trust," as well as a threat to the electoral process.

But there are a few things to consider before you bust out your "I'm With Her" hats. First, it would actually have to be proved that Trump lied about not knowing that Russian hackers had released Clinton's emails or aided him in the election in any other way, which would require a full investigation.

Maybe I'm cynical, but when two of New Jersey Gov. Chris Christie's allies were found guilty for Bridgegate — (when a lane was closed on the Fort Lee side of the George Washington Bridge to punish Mark Sokolich, Fort Lee's mayor, who didn't back Christie when he ran to be re-elected) — yet Christie was never found to have any connection or knowledge of the crime, I'm not going to hold my breath that an investigation of Trump would reveal that he knew about Russia's interference.

The other thing to keep in mind is that only two U.S presidents have ever been impeached — President Andrew Johnson and President Bill Clinton — and both rulings were overturned by the Senate. Which means that even if Trump were to be impeached, the odds are for him remaining in office, especially with a Republican House and Senate.