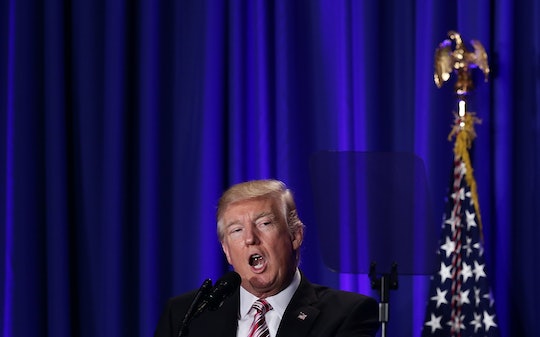 On Tuesday evening, President Donald Trump is scheduled to make a primetime announcement regarding his pick for the next Supreme Court justice to fill the void on the bench left by Antonin Scalia, who died unexpectedly early last year. After Senate Republicans refused to even hold a confirmation hearing for Merrick Garland, President Obama's Supreme Court justice nomination 10 months before he left office, Senate Democrats have promised to engage similar tactics to prevent Trump's SCOTUS picks from being confirmed. But could Trump stop Congress from blocking his SCOTUS pick?

In theory, the U.S. government is built with a system of checks and balances so that a president can't stack the court with justices of any one particular political agenda. Any Supreme Court nominations made by an acting president must first be confirmed by the Senate, usually through a series of confirmation hearing on the Hill.

Currently, the GOP-controlled Senate can only confirm a Supreme Court justice with a supermajority, or two-thirds vote. While Republicans control the Senate, they don't have a supermajority — a minimum of 60 votes — to push through any of Trump's nominees. The GOP has only 52 seats in the Senate, compared to the Democrats' 46 seats and the two Independents who caucus with the Dems. As such, the Democrats have pledged to filibuster any of Trump's SCOTUS picks, but Republicans could just get rid of filibusters altogether, via what Trump called the "nuclear option" in an interview with Fox News host Sean Hannity.

There is also an improbable — but not impossible — way in which Trump could circumvent confirmation delays for any of his Supreme Court appointees, thanks to a rarely used Article in the Constitution. Article II Section 2 Clause 2 of the Constitution gives the president the executive authority to make recess appointments.

The President shall have Power to fill up all Vacancies that may happen during the Recess of the Senate, by granting Commissions which shall expire at the End of their next Session.

In non-Constitutional jargon, this means that if the Senate is in recess and there are vacancies in presidentially appointed positions yet to be filled, the president can make a recess appointment — but the appointee can only serve until the end of the congressional session.

For now, Americans must wait to find out just how extreme of a conservative justice Trump has picked and hope that the Democrats can keep that SCOTUS seat from being filled.