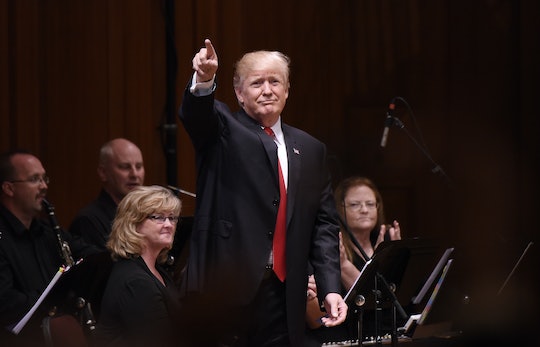 Somehow, President Trump still has access to his Twitter account and he is making waves yet again — this time, through an attack aimed at CNN. The tweet in question features the POTUS wrestling and punching mercilessly a person with the CNN logo superimposed over their face — an insinuation that Trump was beating the media outlet, presumably for a story regarding a former Trump associate that had recently been retracted. Obviously, the tweet garnered outraged criticism from people on both sides of the aisle. But could Trump's wrestling tweet get him impeached?

BBC News reported that the video clip was an edited version of Trump's WWE appearance in 2007, in which he wrestled with Vince McMahon, the owner of the WWE franchise. The scripted fight occurred several years before Trump was inducted into the WWE Hall of Fame in 2013.

The short video reportedly first appeared on a pro-Trump internet forum over the social media site Reddit, where it quickly became one of the site's most popular posts. It has since spread to a number of platforms, including Trump's own Twitter account. After the president retweeted the video, Reddit users expressed their shock at his actions. Perhaps most astonishingly, the video clip was also retweeted by the official presidential Twitter account, @POTUS, which is operated by the White House.

While running for office, Trump used Twitter as a platform to gain public attention and incite passions for his campaign. Many argue that Twitter is what helped him win the election — but it may be the cause for his downfall as well. Romper has reached out to the White House press office for comment and is awaiting a response.

Media personalities and government officials alike have weighed in on the potential repercussions of the video after CNN accused Trump of inciting violence. Ana Navarro, a Republican Trump critic and regular CNN contributor, called it an incitement to violence. He is going to get somebody killed in the media."

Not everyone agrees with the severity of the tweet. Homeland Security Adviser Thomas Bossert, took the tweet much less seriously. "No one would perceive that as a threat," he said.

Trump's wrestling tweet comes shortly after his sexist Morning Joe tweet, in which he insinuated host Mika Brzezinski had been supposedly bleeding from a cosmetic surgery when she met with him over the holidays, and which brought resounding cries for his removal from office. While his critics have called for impeachment a numerous times since Trump took office, they are now citing a little-known clause in the Constitution as a means of having him removed, one that would call into question his fitness to govern.

The clause being examined is the fourth clause of the Constitution's 25th Amendment. This clause allows for the removal of a president who is "unable to discharge the powers and duties of his office." Those proposing the clause as means of dismissal are claiming that his sexist outburst shows his inability to properly govern our nation.

The exact language of the clause is as follows:

According to Yahoo News, 25 Democrats are backing a bill based on this Constitutional clause that could lead to Trump being removed from office. Specifically, the bill would create an Oversight Commission on Presidential Capacity, which would aim to prove his incompetence. The bill could only lead to dismissal if Vice President Mike Pence signs off on it, along with a majority of either Trump's Cabinet or a majority of Congress.

The requirements for this bill may keep it from achieving its goal. But one thing is for sure: President Trump's social media presence is causing him to lose support from members of both parties and the public alike.