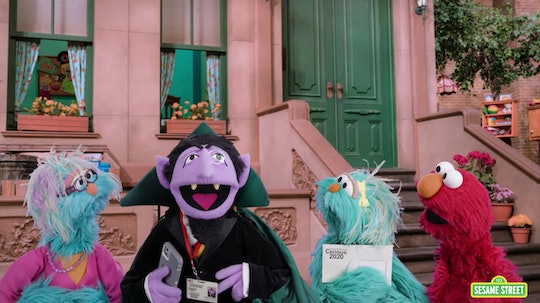 The U.S. Census Bureau has teamed up with someone well-known for his exceptional counting skills in an effort to correct the long-standing and pervasive issue of undercounting of young children in Census Bureau surveys. That's right, Sesame Street's Count wants kids counted in the census. And with the help of a few friends, he's urging parents of young children to make sure they get counted in 2020's data.

The Count starred alongside Elmo, Rosita, and Rosa in a public service announcement recently shared by both Sesame Street and the U.S. Census Bureau. As a counting enthusiast, it's no surprise that the Count has been designated a census taker and considers the census to be his "favorite time of the decade." He goes on to describe the census as "a special time when we count each person in every home in all the neighborhoods across the country."

"Everyone in your home counts," the Count said. "Especially little kids and babies." The Count then goes on to explain that it's important to include babies and young children in the census count as the data is used to fund schools, hospitals, and public transportation.

The U.S. Census Bureau has acknowledged what it calls "the long-standing undercount of young children in decennial censuses and in Census Bureau surveys" and noted it's "a larger problem for some racial and ethnic groups and some parts of the country." Their recent partnership with Sesame Street is one example of how they are working to see all children and families counted in the 2020 census.

"The census determines over $1 trillion in federal spending each year for programs that help give kids a strong start in life, and yet those who stand to benefit the most from an accurate count are the ones most likely to go uncounted," President and CEO of Sesame Workshop Jeffrey D. Dunn said in a statement released Monday. "As an organization trusted by parents and caregivers, Sesame Workshop is committed to doing everything we can to ensure that every child is counted in this year’s census. This is a once-in-a-decade opportunity to help level the playing field and improve the collective well-being of our nation’s children."

To help address uncertainty about who counts on the census questionnaire and inform potentially linguistically-isolated households about the census, Sesame Street will air its public service announcement in English and Spanish, according to a press release from Sesame Street Workshop.

According to the U.S. Census Bureau, households are expected to begin receiving invitations asking them to submit their head count for the 2020 census as early as Thursday. Responses to the census can be made online, by phone, or by mail.

More Like This
Sesame Street’s Adorable Friends Parody Is A Father’s Day Treat For Dads & Kids
Meghan Markle Calls On Men "To Be Vocal" In The Aftermath Of Roe v. Wade Ending
AAP Says Kids Will Face "Grave Consequences" Now That Roe V. Wade Is Overturned
Robb Elementary School Is Set To Be Demolished After Deadly Shooting