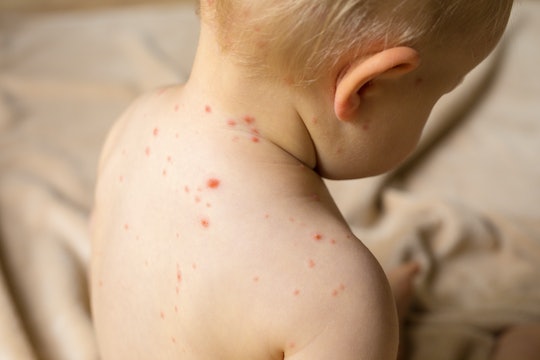 This Eye-Opening Map Shows Which U.S. Counties Are Most At-Risk For Measles Outbreaks

At least 10 measles outbreaks have erupted across the United States in 2019, prompting discussions regarding the importance of vaccinations. This pressing topic resurfaced again when, on Tuesday, May 9, researchers at The University of Texas at Austin and Johns Hopkins University highlighted the counties most at-risk for measles outbreaks via an eye-opening map. The data-driven graphic reiterates the documented relationship between low-vaccination areas and outbreaks, proving once again that vaccinations are key in preventing the spread of this infectious disease.

Researchers at The University of Texas at Austin and Johns Hopkins University recently teamed up to identify the top counties at-risk for measles outbreaks, using a risk-analysis model that examined international travel and vaccination rates. The results, published in the The Lancet Infectious Diseases, found that areas with high international travel and low-vaccination rates are hotspots for measles outbreaks.

Sahotra Sarkar, the study's lead author and a philosophy and integrative biology professor at UT Austin, explained, according to UT News: “We have long known that vaccine avoidance is a critical public health issue in the U.S. and Europe. Our results show how travel from regions elsewhere compounds this risk.”

Sarkar and his fellow researchers took their findings a step further by creating a map that visually highlights at-risk areas on a color-coded scale. Areas shaded dark red are high-risk, while low-risk areas are shaded light pink. The top five at-risk counties in order are:

Most notably, researchers accurately predicted high-risk areas that have already experienced measles outbreaks in 2019, including counties in Washington, Oregon, and New York. And "30 of the 45 counties that have reported measles cases to the Centers for Disease Control and Prevention were either included on the researchers’ list of 25 high-risk counties or are adjacent to a county listed," according to UT News.

As for the issue of international travel, this map shows that many high-risk areas are close to international airports (Salt Lake, Utah, Travis, Texas, and Honolulu).

"The majority of measles cases that are brought into the United States come from unvaccinated U.S. residents," the CDC warns, adding that parents and their children should receive the MMR vaccine before international travel. This applies for infants, too — any baby 6 months through 11 months of age should have 1 dose of MMR vaccine," according to the CDC.

Of course, these risks factors applies to other diseases, too.

“The vaccine avoidance problem is not limited to measles. Pertussis — whooping cough — is another disease making a comeback because of dropping vaccination rates, and we predict serious outbreaks in the U.S. in the near future,” Sarkar added, according to Culturemap Austin. “Policymakers must focus on centers of vaccination refusal as well as regions with a lot of passenger inflow from affected countries worldwide if there are even small local pockets of unvaccinated people.”

Thanks to this enlightening map, policymakers and parents have the information necessary to make better-informed health care decisions. First and foremost, get your family vaccinated. And if you plan to travel internationally, make sure your vaccinations are current. As the University of Texas at Austin and Johns Hopkins University's researchers noted, this epidemic needs to be treated seriously.