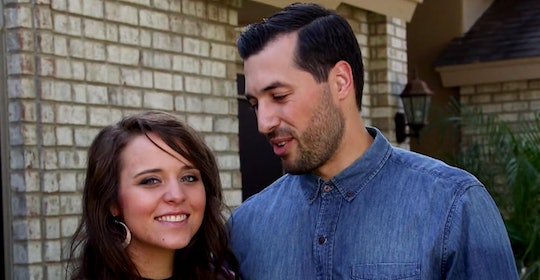 There are a lot of Duggar siblings to keep up with — 19 of them (not including the older siblings' kids and spouses that make the family whole), exactly. And when the family's TLC reality show, Counting On, isn't on air, it makes keeping up with the Duggar family a lot harder. Jinger Duggar, for example, is currently pretty far along in her first pregnancy, but has been mum on the details of her baby-to-be since the show hasn't been regularly airing. Because of this silence, Counting On fans have come up with some baby name theories for Jinger and husband Jeremy Vuolo's first child, who is expected to arrive this summer, and their newest idea is completely valid.

Jinger has just a number of weeks left in this first pregnancy and fans are definitely excited for this baby's arrival. Jinger and Jeremy's baby is reportedly due this July, according to Radar Online, which means that Jinger has a just over a month left to enjoy being pregnant and prepare for her baby girl — whose sex she revealed in April, during a party held for family and friends, according to TLC.

Parents do a lot of preparing during those last and final weeks of pregnancy, which includes the right name for their baby. Some fans on Reddit have gone as far as to speculate what name Jinger might pick, according to Celebrity Insider, and one name seems to be the clear frontrunner — Abigail.

Abigail is the perfect name for their daughter, according to Reddit user, canmu, because the name is "cute and modernish, but also traditional, and a strong biblical woman." The theory is pretty popular among users, earning quite a bit of accolades in the reddit thread. "I don't see them doing Ruth or anything like that, so if not Abby, I can see them getting away from biblical and using a modern name like Piper," canmu added.

Other Reddit users seem to agree that the name Abigail would be perfect for Jinger and Jeremy's daughter. "I think they might stick with biblical names because Jeremy is a pastor," one user wrote. "Abigail is pretty popular right now," another user added.

While these Reddit users seem to love the name, it is important to remember that the name Abigail is simply just a suggestion from fans — not a confirmed name from either Jinger or Jeremy. And until either of them confirm what name they're thinking of, all of these theories are just theories.

But don't hold your breath waiting for Jinger and Jeremy to announce their daughter's name before her arrival. As one Reddit user pointed out, the Duggar siblings (with the exception of Jill Duggar) have been notoriously quiet about waiting to release the names of their children until they give birth. This means that fans will have to wait just a little longer until they know for sure what Jinger and Jeremy name their daughter — especially since Jinger announced last week on Instagram that she is 31 weeks along, according to People.

In the meantime, until Jinger gives birth to her daughter and announces her name, fans can speculate about what she might name her daughter. So far, fans seem to be having a lot of fun with that.