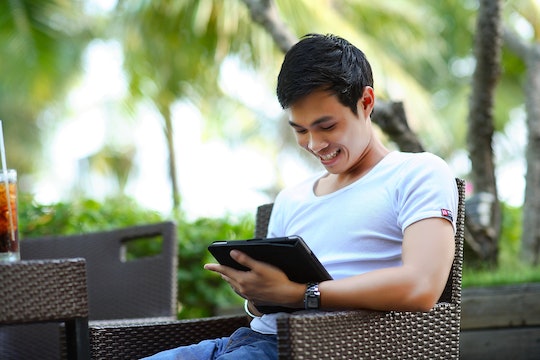 Couples Can Now Test Sperm On A Smartphone App, & It's Shockingly Accurate

Turns out Apple was right all along — there really is an app for that. And by that, I mean couples trying to conceive can, beginning in January, test sperm on a smartphone app approved by the FDA and available for pre-order before its official launch in the new year. The YO Sperm Test works like this: The app pairs with a detachable YO Clip (a mini-microscope) that affixes to your phone and accesses its light, focus, and recording functions. A sperm sample is prepared on a slide and inserted into the clip. In just two minutes, the actual swimmers (depending on motility, of course) are visible on your phone screen; test results follow one minute later and are recorded in the app, along with a video of the sperm in action… or nonaction, if you're one of the 15 percent of couples struggling with infertility, caused by male reproductive issues in roughly one-third of cases.

The YO Sperm Test differs from other kits currently on the market because it not only analyzes how many sperm you have, but also how well they move. Marcia Deutsch, CEO of Medical Electronic Systems (YO Sperm Test's parent company), told Fit Pregnancy the at-home analysis is highly accurate:

The technology is able to read the sperm sample 99 percent of the time, as long as the instructions are followed. [If it can read the test] the results are more than 97 percent accurate based on FDA studies of 316 participants.

According to its iTunes description, the YO Sperm Test — which retails for $49.95, though the app itself is free — includes all the supplies for running two semen samples, including collection cups, liquefying powder, pipettes for sample aspiration, fixed coverslip slides for sample testing, and the YO Clip. The software evaluates light fluctuations caused by the sperm's movement and translates them into what's called motile sperm concentration, allowing you to test your sperm in the comfort of your own home without waiting for a doctor's appointment.

Knowing your sperm status could be a good idea even if you're not trying to conceive. A 2014 study published in the journal Fertility and Sterility found that sperm defects could be associated with various health problems, including high blood pressure, heart disease, and skin and glandular disorders. Lead researcher Dr. Michael Eisenberg, Stanford School of Medicine, told WebMD that male infertility could be "a marker for sickness overall." He said of the study's results:

This is another piece of evidence of how important not only fertility is, but overall health. There is a lot of overlap. Regardless of what your goals are, whether it's to live forever or have a baby, it's important to take care of yourself.

Like any home test, the YO kit should be considered a first step in determining the health of your sperm. The company recommends seeking medical advice if both YO tests report results of less than 6M/mL, per statistical modeling and sperm-evaluation guidelines set by the World Health Organization. If further evaluation results in a diagnosis of infertility, you have options: advances in male infertility treatment can offer real help, and lifestyle modifications such as exercising regularly, avoiding smoking, eating a healthy diet, and limiting alcohol consumption could help improve your sperm quality and chances of conception.