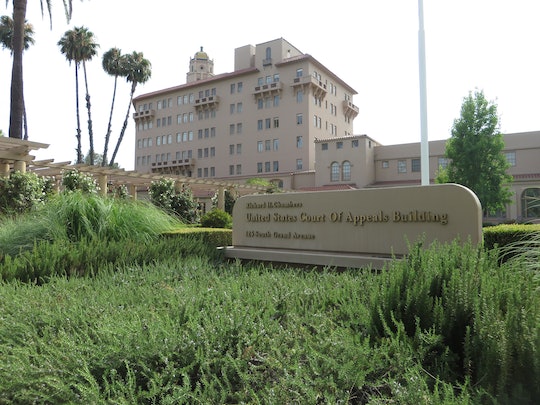 Court Documents From The "Save Lexi" Case Reveal Sad Details

Summer and Rusty Page of Saugus, California, have vowed that they'll never give up fighting for the return of their foster daughter, Lexi, according to People. Lexi, who has been a member of the Page family for four years, was taken from the Page home on Monday in accordance with the Indian Child Welfare Act, a law that's meant to prevent the unethical adoption of Native American children by white families as a means of erasing Native American culture, a practice that was shockingly common in the 1950s and 1960s. But as the world turns its eyes to the "Save Lexi" cause, court documents show that this isn't the what lawmakers had in mind when the ICWA was created.

According to a 2014 appeals court document, Lexi was removed from her biological parents' custody at just 17 months old. The document states that her biological mother had a substance abuse problem, and Lexi was the seventh child of whom she'd lost custody. The court also acknowledges that her biological father has "an extensive criminal history" and had also previously lost custody of a child. Lexi bounced around to different foster homes (reportedly suffering a black eye at one of them) before being placed with the Pages in 2011. Lexi's paternal grandmother alerted the Los Angeles County Department of Children and Family Services that her son was a member of the Choctaw tribe, but the tribe agreed to her placement at the time.

The Pages allegedly were involved in another custody battle for another one of their foster children at a separate time. They lost that battle as well and the child was returned to family members. A court found that the Pages could not prove that returning Lexi to family members would cause her emotional harm, according to ABC7 News.

Lexi's biological father, who is now a registered member of the Choctaw tribe, "initially denied any Indian heritage," according to the court's findings, and there's no evidence that he "ever lived on a reservation or had any social, political, or cultural ties to the tribe." Lexi also has no connection to the Choctaw tribe, other than the fact that one of her 64 great-great-great-great-grandparents was a member. ICWA defines an "Indian child" as "any unmarried person who is under age eighteen and is either (a) a member of an Indian tribe or (b) is eligible for membership in an Indian tribe and is the biological child of a member of an Indian tribe," and federal law dictates that tribes can determine eligibility or membership however they please.

While the original plan (that everyone involved agreed to) was for the Pages to care for Lexi until she could be safely returned to her father, according to People, he reportedly stopped trying for reunification in 2012 because he thought it would be too difficult to achieve. Now, she's being sent to Utah to live with a woman the court identifies as "Ginger R.," who is the niece of Lexi's deceased grandmother's widower. Ginger and her husband, Ken, are not relatives of Lexi, nor are they members of the Choctaw tribe.

The "R" family has been vying for custody of Lexi since her biological father told DCFS that he no longer wanted to continue reunification services, and they have the support of the Choctaw tribe. Indian Country Today Media Network reported that the father was "tired and fed up" with complying with the reunification case plan, which included parenting classes, drug testing and counseling. The family has been in regular contact with Lexi via Skype and visits, although court testimony indicates that before at least one visit, Lexi "was upset and said she did not want to visit with the Rs and did not like it when they came to visit."

The court originally ruled in 2014 that Lexi should stay with the Pages, as therapists and social workers testified that she was bonded with them, and removing her from the home would be traumatic to the girl, who previously suffered from reactive attachment disorder. That decision has now been overruled, and Lexi has been sent to live with the R's, who also have custody of her father's teenage daughter.

On the other side of the coin, Leslie Starr Heimov, the executive director of the Children's Law Center of California who represents Lexi in court, told CNN the debacle is the fault of Lexi's foster parents. Heimov said that Lexi could have been reunited with the family sooner and saved a lot of potential trauma if the Pages hadn't pursued litigation:

Her family in Utah have been waiting to receive her for over three years. During that time they have traveled to California monthly and she has visited their home as well.

Unfortunately, it seems that the system was unable to find a solution that was in the best interests of Lexi and all of the adults in her life. The Pages filed an appeal to the California Supreme Court on Tuesday.