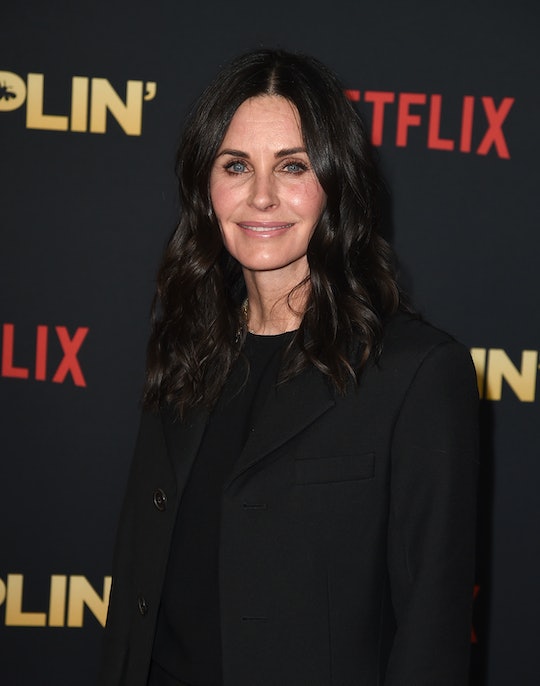 Friends was one of the most iconic shows of the '90s and early 2000s, and fans are desperate for the cast to reunite and bring the show back. While that hasn't happened (yet!), Courteney Cox channeling Ross from Friends is the best thing you'll see today.

In an Instagram video posted on Saturday, the 54-year-old actress narrated three men moving a table from one room in her home to another. She can be heard saying, "Just trying to move a piece of furniture down the hall. My movers are here," before jokingly shouting, "Pivot! Pivot!," like her on-screen brother Ross (David Schwimmer) in perhaps one of the most memorable scenes from Friends.

Cox captioned the clip, "Just another Friday night #pivot." The line was first delivered in a 1999 episode of the show's fifth season. In the original, Ross repeatedly yelled the word at Chandler (Matthew Perry) and Rachel (Jennifer Aniston) as they helped him move a couch up a flight of stairs.

While this may be the first time Cox has gotten back into character — albeit not her own — she regularly reunites with her co-stars. In fact, just a few days ago the former Cougar Town star shared a photo of herself with Lisa Kudrow, who played Phoebe on Friends. The photo was taken some years ago. Cox revealed that Kudrow, 55, was shocked when she first saw the picture.

"'IS THAT YOU?' What Lisa K said when I showed her this pic," she captioned the image. Her captioned inspired the following hilarious response from Kudrow, who wrote, "Yeah I said that...but at least your hair doesn't match a poodle."

The pair also recently attended Aniston's 50th birthday bash together. The event was health at the Sunset Tower Hotel in Los Angeles in February, according to a report from W Magazine. Other big stars at the party included George and Amal Clooney, Reese Witherspoon, and Aniston's ex-husband, Brad Pitt.

In 2016, the whole cast — sans Matthew Perry, who was rehearsing for a play in London — came together for a tribute to James Burrows, who directed Friends, according to the Today show. The cast was interviewed by Andy Cohen, who hosted the event. In a video, the cast reflected on the time they spent together on the set of the wildly-popular show. Aniston called it "the best 10 years of our acting careers," revealing that they essentially grew up together.

"We experienced friendship, family, heartbreak, babies, everything together. And we also had a wonderful experience with the world loving us as well," she added, according to the Today show.

She added that getting along was easy from the start, telling Cohen they "really just wanted to hang out with each other." The actress said during the event that they never felt like working on Friends was work.

"It was not 'We have to do this.' We really just fell in love and adored each other instantly, and would hang out at each other's houses and watched the show together," Aniston recalled, prompting Matt LeBlanc, who played Joey on the show, to chime in with, "Scenes you weren't in, you would watch and kind of try to think of ideas for one another. Everybody was really supportive of one another."

Friends fans continue to hold onto hope that the show will get rebooted. In the meantime, they'll have to settle for watching the cast come together during real-life scenarios and events. That's something, isn't it?