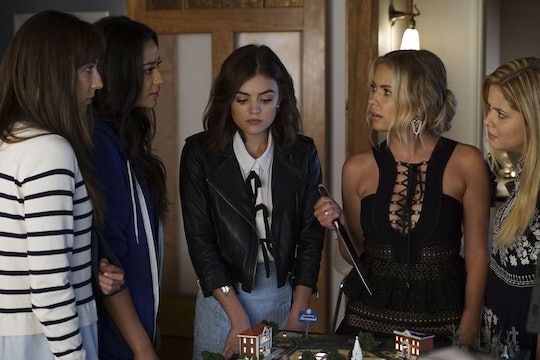 These 'PLL' Theories Are Crazy Enough To Be True

Although the final season of Pretty Little Liars promises to answer all of our many questions, that doesn't mean fans have stopped theorizing. In fact, it's only made their theories become more specific and maybe even more accurate, though viewers won't know for sure until the final episode debuts. It's as if the closer the Liars get to discovering the truth, so do we. Below are some of the craziest Pretty Little Liars theories from Reddit that actually make sense, and they may just also blow your mind.

When it comes to theories, fans have an answer for almost everything. They know who made the board game and why and most important of all, they have tons of theories about who A.D. is and they've got the evidence to proof it. Between digging up clues from every season thus far, rounding up I. Marlene King's tweets, and the casts' Snapchats and interviews, no one's better at theorizing than PLL fans. Truthfully, the fans would probably handle A.D.'s games better than the Liars at this point. Check out some of their craziest theories below.

Spencer Has a Twin

This theory has been brought up multiple times but Reddit user pllfan23 brings in some solid evidence. The Redditor points out that Veronica said she got Spencer five minutes after she was born, but according to Dr. Cochran, Mary's "second baby" went into temporary custody with child family services. Also, in Dr. Cochran's memories, the baby was in a blue blanket, but in Veronica's memory the baby is in white blanket. To top it all off many fans, like Reddit user prettylittleangry, believe A.D. stands for Avery Drake, which could be the name of Spencer's twin.

The Board Game Has Been Part Of The Show All Along

Reddit user hefthannabanana suggests the board game A.D. put together for the Liars isn't exactly new. Instead, they suggest the game is the reason why Mona, CeCe, Noel, Jenna, etc. were doing A.D.'s bidding. Everything thus far were "dares" by A.D. to get the Liars to this point where it's now their turn to play.

Lucas Made The Board Game

Most fans are agreed that Lucas made the board game since he is an app developer, but Reddit user tinylittlepups doesn't believe that he's A.D. Instead, they suggest Lucas is the final red herring before the big reveal and that Lucas is actually just doing A.D.'s bidding.

A.D. Is Wren And/Or Melissa

According to Reddit user jdpm1991, King said A.D. was someone that appeared in the pilot, leading them to believe it's either Wren or Melissa. Additionally, the person who kidnapped Jenna was wearing scrubs, which has led many fans to believe that it's Wren, although others point out it wouldn't be the first time A.D. donned a costume.

The Liars Are A Figment Of Aria's Imagination

There have been plenty of theories about Aria, but this one may just take the cake. Reddit user EziraEndgame suggests the other Liars are actually dead and everything that's happened has actually been in Aria's head. In reality, Aria's currently in Radley, possibly because she killed the others. Is this theory kinda out there? Absolutely. But can you imagine if it turns out to be true?

Fans will just have to keep watching to see if any of these insane (but incredibly brilliant) theories end up coming to pass.