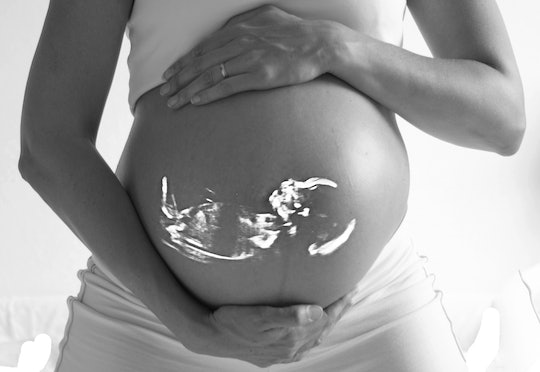 Creepy Ultrasound Photos Better Step Up Their Game, Because We Found The Winner

Expectant parents-to-be routinely go into their ultrasounds hoping for a glimpse of their adorable baby growing inside the mother. Often, the baby can end up looking pretty freaky, but in the case of this mother’s creepy ultrasound photo, the freaky part wasn’t the baby at all — it was the images flanking the baby.

The main image that people are losing their minds about (more than 2.5 million people on Reddit, at this point) is actually the one on the right. The one that most people agree looks like some kind of devil watching over the baby. Slightly terrifying, right? Of course, others have seen a harmless, friendly mermaid, as well as a Hindu goddess (I get that; it kind of looks like Kali), so it’s not all spawn-of-Satan talk. These latter people are clearly very glass-half-full and I respect and admire their optimism. I, for one, am troubled and worried.

There’s an image on the other side of the baby, though, and it’s far worse, if you ask me. It looks less human and more like some horrific screaming phantom. Lovely, right? I’m not sure what I’d do if that was my ultrasound photo, but it might involve some laying on of hands, crystals, or smudging.

Of course, this isn’t the only ultrasound that’s ever turned out strangely. I admit that some of the second trimester ultrasound photos of my son were creepy (have you ever seen a profile where they get the skull and teeth? That’s a whole lot of NOPE.), and left me wondering what I was going to give birth to. And honestly, I kind of feel like the whole concept of using the ultrasound as an early opportunity to see what your baby looks like is just a recipe for disaster. I mean, who wants to worry about whether their baby is strange-looking (or that they’ve got the spawn of satan watching them) for the remainder of her pregnancy? Perhaps we need to go back to letting the ultrasound be a chance to make sure the baby is healthy, find out if it’s a boy or a girl, and let the rest be a surprise. For our own sanity.

What do you think?