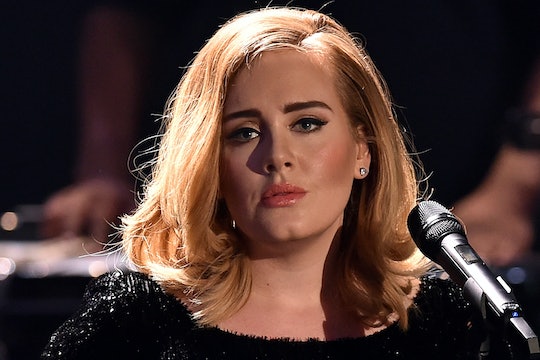 Earlier today, many fans went wild when it was revealed Adele was on the cover of TIME magazine. Dressed in a red (and, presumably, wool) coat and sporting a similar shade on her lips, the singer blew everyone away with her intense gaze and stunning appearance. Erik Madigan Heck, the photographer who shot the cover of this week’s issue, told TIME that the response was precisely what he was hoping for:

I wanted to create timeless images that showed Adele in a simple and colorful light. She is like an old world beauty, so I just wanted to show her natural elegance.

And to drive home not only the beauty and simplicity of this picture but the true grandeur that is Adele, only one word — her name — appears alongside her on the cover. (Because what more really needs to be said.)

In the cover story, the Grammy-winner talks about everything from social media and music, to family life and her now-infamous decision not to stream 25. (And, IMO, the article is even better than the picture.) But, everyone is talking about the cover shot. Everyone is talking about what Adele is — and is not — doing, what she is — and is not — wearing.

You see, while I think Heck’s photograph captured the essence of Adele — and most seem to agree the singer looks “gorgeous,” “graceful,” “beautiful,” and even “flawless” — some people aren’t happy. In fact, those who are dissatisfied are mainly questioning one thing: Why the singer is so covered up? Is this an attempt by the media to cover up anyone who isn't model thin?

And others are complaining this isn’t the type of cover she deserves:

Here’s the thing: Do these people know who Adele is? Like really know what image she's going for? Have they noticed her “style,” or even seen her previous magazine covers? Because if they had, they would know this conversation is moot — at least when it comes to Adele. Her coat is not part of some social conspiracy, it is “just Adele,” because Adele always covers up (if you want to say that's even what she was doing by choosing a style of dress). If people don’t believe me, they can Google “Adele magazine covers.” It is her part of her image, part of who she is, and it is — in one word — Adele.

That said, the debate some Twitter followers have brought up is one worth having, because there is a problem with the way mass media presents women and how American society celebrates those who are thin but shuns those who we consider “fat." It is an important conversation and one which should be explored me, fought more, and talked about more — and it is a discussion we’ve been having for quite some time.

But should we have this conversation today, with Adele? No. This cover would we wrong if it were done any other way.