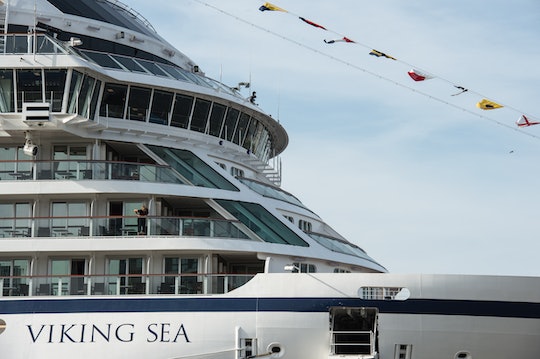 Cruises are meant to be a fun break from reality, but a recent trip turned into a nightmare for the passengers and crew members aboard a Viking Cruise ship. Hundreds of cruise ship passengers had to be evacuated by helicopter after the ship faced engine failure and rough seas off the coast of Norway, according to a report from Fox News.

According to the outlet, the ship sent out an initial distress call on Saturday afternoon. The ship was only two kilometers from shore, but only one engine was working and one anchor was holding, Fox reported. In a separate report, USA Today revealed that 479 passengers were flown to shore and scheduled to start flying home on Sunday. Another 436 passengers and 458 crew members were still on board as the damaged ship made its way to port, the outlet said. The ships owner, Viking Ocean Cruises, told USA Today 20 people were injured onboard the ship, though some of those people were quickly treated and released.

"We understand 20 people suffered injuries as a result of this incident, and they are all receiving care at the relevant medical centers in Norway, with some already having been discharged," the company said in a statement, according to Fox. The majority of injuries included cuts from broken glass flying as the boat thrashed, the outlet said.

Rescuers couldn't use lifeboats or other such vessels to evacuate passengers because of the conditions, Fox shared. The ship was reportedly stuck amid 43 mph winds and waves clocking in at over 26 feet high. Five helicopters were tasked with rescuing passengers, the outlet reported. They worked through the night to get people from the boat onto land, but eventually stopped when the ship was cleared to sail to shore Sunday morning, Fox said.

Viking released a statement about the status of passengers and crew aboard the troubled ship on its website on Sunday. In it, the cruise line said everyone was "safe" and would be heading home beginning that evening.

"All passengers and crew are safe, and passengers will be flying home starting tonight," the statement read. "Throughout all of this, our first priority was the safety and well-being of our passengers and our crew. We would like to thank the Norwegian Redningssentral and the Norwegian emergency services for their support and skill displayed in managing the situation in very challenging weather conditions."

Romper reached out to Viking Ocean Cruises for comment, but did not immediately hear back.

Passengers shared videos from their time stranded awaiting rescue, which showed the truly frightening conditions. In one video, posted by Alexus Sheppard, widely circulated on Twitter, the ship appeared to be rocked from side-to-side, causing furniture to slide throughout the ship. In the clip, passengers appear relatively calm, despite the ship's tilting. Other videos Sheppard posted showed passengers gathering at muster stations to get life vests. The stranded cruisers did not appear to be in distress as they put on the vests in what looks like an auditorium, and awaited further instructions. David Hernandez, who was also aboard the ship, posted a clip showing water running at people's feet.

While the videos would suggest that passengers weren't frightened during the ordeal, some people who were aboard the ship have come forward with some true horror stories. Carolyn Savikas of Pennsylvania spoke with Norway's VG newspaper, saying she heard a "terrible crash" and then the ship started rocking. She recalled shortly after hearing the noise, water raced inside the vessel, shattering a door.

"We were in the restaurant when a really huge wave came and shattered a door and flooded the entire restaurant," she told VG. "All I saw were bones, arms, water and tables. It was like the Titanic — just like the pictures you have seen from the Titanic."

Another passenger told The Associated Press his wife was "thrown across the room." Rodney Horgen said windows and a door flew open in the chaos, allowing water to flow in and sweep people away. His wife, according to The Associated Press, was among those caught up in the swell.

"When the windows and door flew open and the 2 meters of water swept people and tables 20 to 30 feet, that was the breaker. I said to myself, 'This is it,'" he recalled, according to the outlet. "I grabbed my wife but I couldn't hold on. And she was thrown across the room. And then she got thrown back again by the wave coming back."

Although the rescue doesn't appear to have gone as smoothly as Viking might have liked, Viking Cruises chairman Torstein Hagen praised authorities and the ship's crew for how they handled the mission. He told VG he was "very proud."

The ship was traveling to the Norwegian towns and cities of Narvik, Alta, Tromso, Bodo and Stavanger, according to Fox. It was scheduled to arrive at the British port of Tilbury on the River Thames on Tuesday. Americans, British citizens, Canadians, New Zealanders, and Australians were on board, the outlet revealed. The journey was to last 12 days in total, CruiseMapping.com shared. It was first boarded on March 14.

The nightmare is over for all the passengers and crew members aboard this Viking Sky cruise, but travelers may think twice before boarding another vessel with their families. The high seas aren't for the feint of heart.