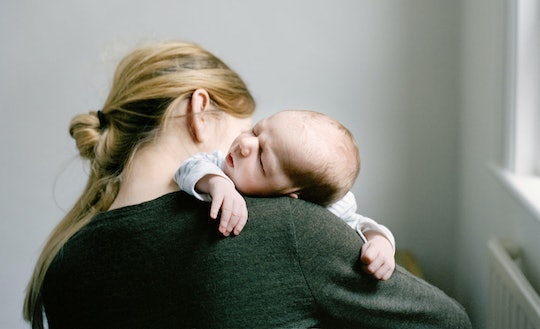 I sat down on the cold step at the foot of my back door and laced up my running shoes, tears crystalizing to ice on my cheeks. It was February in Michigan. Snow covered the ground, and it was dark out. The sun had set hours before. I don’t think I really believed I was going to go for a run, but I had to get out of the house. Had to get away from the crying — my 10-month-old’s crying. My own crying. Inside, my then-husband was acting as the default “listener” because my heart couldn’t withstand the guilt of letting my baby “cry it out.”

I never imagined I would go that route. Like most moms, I couldn’t bear to hear my baby cry. The thought of him lying in a dark room by himself, wailing for me, needing me, and thinking I’d abandoned him, was nearly intolerable. But even more intolerable was the sleep deprivation I had endured for the entirety of his short life and even the months before that, because everyone knows your last trimester is spent peeing every half hour whether you’re awake or asleep. I hadn’t slept longer than a four-hour stretch in over a year.

I considered myself to be a gentle mother. I breastfed on demand, supplementing with formula when necessary, never refusing my son’s request to nurse. You can’t spoil a baby, I’d read in my books on attachment parenting. But I had also tried to coax my son into giving me the occasional break at night, sometimes making him wait a little, just a little, hoping that after a few minutes of whimpering, he’d realize he wasn’t really hungry and drift back to sleep. All the books said my baby would eventually stop waking in the night. It was supposed to just... happen. Some combination of getting enough calories during the day and settling into a proper circadian rhythm.

But my solid-food-eating 10-month-old was still waking up every two hours to nurse. I tried keeping him in bed like some of the books suggested so he could feed on demand without disrupting my sleep, but then he would want to nurse the entire night, waking up and grabbing for me every time I moved. So I transferred him back to his room and surrendered to the bi-hourly wake cycle.

I’d read too many lengthy accusations that cry-it-out was damaging to a child’s developing mind, that it could break attachment or interfere with breastfeeding.

I had resisted my sister’s advice to try cry-it-out. She did it with both her babies at three months, said they cried for 30 minutes the first night, 15 minutes the second night, and just a few minutes the third night. She refused to entertain even one ounce of criticism or shame for her tactics — she had, she reminded me, two robustly healthy, firmly attached, and incredibly well-rested children. They slept a solid 11 hours every night, leaving her a peaceful few hours in the evening to get caught up with household chores or enjoy a glass of wine and an extra hour in the morning to sleep in.

But I couldn’t get past the thought of listening to my baby cry for an indeterminate number of minutes. I’d read too many lengthy accusations that cry-it-out was damaging to a child’s developing mind, that it could break attachment or interfere with breastfeeding. It didn’t seem to align with the brand of attachment parenting I was so earnestly trying to succeed at.

So I exchanged my son’s potential tears for my guaranteed ones. For months I cried several times per day, trudging through my house in my sour-milk-smelling robe and gnarled hair, tears dribbling down my cheeks. I cried while breastfeeding, staring into my baby’s innocent face and wondering how it was possible to love and resent another human being with such violent and equal ferocity. Several times I dropped to my knees at the foot of my bed and prayed to whatever god might be out there to please, please, please, just let me sleep.

I don’t know what my breaking point was, if there was a defining moment where it clicked or if it was just that I had reached a maximum accumulated sleep deficit and simply couldn’t anymore, but I told my husband at the time that he needed to stay while the baby cried and I would go for a run. He was all for it. He could tell the exhaustion was too much. He was to go in and pat our son’s back in 20-minute intervals.

My sweet baby literally did not know how to fall asleep without me.

I paced the back porch in the cold night, letting my tears ice on my cheeks and thinking I deserved that cold, harsh sting. Convinced myself I could hear my son’s wailing through the closed backdoor even though there was no possible way I could actually hear him. His room was on the other side of the house. But my mother’s mind was sure I could detect the sounds of my child’s abandonment.

The backdoor opened and my husband’s head poked out.

The next night he cried for 15 minutes, the next few nights for five, and after that we were able to lay our sleepy, milk-full baby down in his crib drowsy but awake, with no tears at all. Not from him, but perhaps even more importantly, I was only just starting to realize, not from me either. Yes, my baby finally began sleeping through the night, but so did I.

I wish I had sleep-trained sooner. It makes sense to call it “sleep training” because that is really what it was — my sweet baby literally did not know how to fall asleep without me. He was a restless sleeper and needed me every single time he stirred himself awake. It was important that he learn to soothe himself to sleep so he could get enough sleep. I did not damage our bond by helping my baby learn this skill — I strengthened it. After cry-it-out, I was able to look into my baby’s face and feel only adoration. The resentment had disappeared. He was a happier baby, less fussy and quicker to smile, and I was a better mother, more alert and tuned in to his needs.