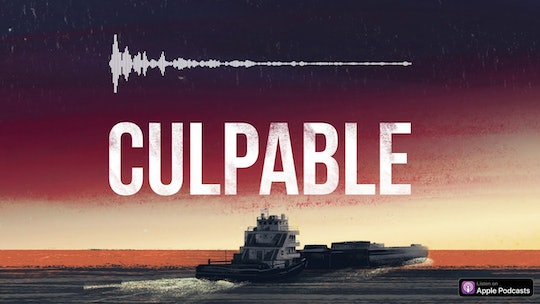 When detectives are investigating a death, it feels safe to assume that they are fine combing each and every detail of the tragic incident to uncover any inconsistencies. Unfortunately, it's not safe to assume that — and a new crime podcast, Culpable, has pointed a spotlight directly at one case in particular where the inconsistencies appear to be nearly endless. In fact, in an upcoming episode, the Culpable podcast reexamines Whitley Goodman's statement to investigators, revealing what appear to be several suspicious differences.

For those of you not up to speed on Culpable, the latest podcast from Tenderfoot TV and Black Mountain Media, it has been investigating the unsettled case of 21-year-old Christian Andreacchio's death. On Feb. 26, 2014, Andreacchio's death was ruled a suicide after he was discovered dead inside his apartment with a gunshot wound to the head. However, as Culpable has uncovered throughout weekly new episodes, a substantial amount of evidence appears to point to Andreacchio's death allegedly being the result of foul play.

In an exclusive preview of Culpable's July 22 episode provided to Romper, the differences between the statements Whitley Goodman provided to investigators are examined. At the time of Andreacchio's death he was in a relationship with Goodman, and she was allegedly present in his apartment when he died.

"Whitley stated adamantly that she was the one who opened the door to the bathroom, not Dylan. And she cried and held Christian's hands while Dylan called 911," Culpable host, Dennis Cooper, recounts in the above exclusive preview, reviewing Goodman's statements to the Mississippi Bureau of Investigation (MBI) and Meridian Police Department (MPD).

As Cooper further explains, "[Goodman] never said she held Christian's hands, and there's no mention of a Dos Equis beer — which, I'm not even sure why she mentioned that. Regardless, the toxicology report was negative."

Even more significant than that, Cooper claims that Goodman's original statement to MPD included that it was her and Andreacchio's friend, Dylan Swearingen, who found Andreachhio's dead body. "Doesn't seem very consistent to me," Cooper states as the exclusive clip comes to an end.

This isn't the first time that Andreacchio's death has been called into question. In a 2017 feature on Mississippi Today, it is reported that the Meridian Police Chief at the time, James Lee, allegedly arrived on scene at Andreacchio's apartment and ordered officers to stop investigating.

Years later the case was reopened by Meridian Police Chief Benny Dubose, who was confirmed in June 2014, according to The Meridian Star. "I think that the investigators on the scene should’ve been allowed to complete their investigation and talk to witnesses,” Dubose told Mississippi Today in a 2017 interview. “The rule of thumb is you treat any crime scene as a homicide until you can prove otherwise.”

Culpable releases new episodes every Monday on iTunes and iHeartRadio.

More Like This
Here's Where To Donate To Help The Families Of The Texas Elementary School Shooting
Teachers Killed In Texas School Shooting Died Protecting Their Students
Take An Exclusive Look At A Brand New, Four-Part Peppa Pig Special
'Top Gun: Maverick' Is More Tween-Friendly Than The Original