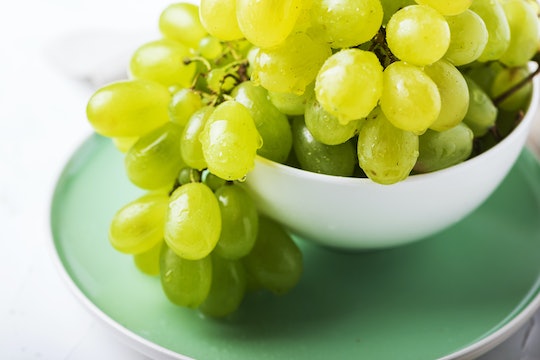 Sorry, You Really Do Have To Worry About Your Kid Choking On Grapes

I am a worrier. While I am not one to fret over every viral story about the possible horrors lurking around each corner, I do find myself wrapped in the worry of the mundane. Things like crossing the street, making sure my fire and smoke detectors have batteries, and the like get to me. One big cause of my motherhood anxiety is choking. My kids are fast eaters, and I worry about this a lot, especially with known hazards like grapes. There always seems to be a story about a kid choking on grapes, but what's the real deal here? Is it that dangerous or common?

A few years ago, the journal BMJ posted an article that went viral pretty much instantaneously. The piece, written by Amy J Lumsden and Jamie G Cooper, was titled simply, "The Choking Hazard Of Grapes: A Plea For Awareness." It outlined the danger of allowing your children to eat whole grapes, citing pediatric deaths as the chief reason why you should simply never allow it. This article echoed the suggestions made previously by the American Academy of Pediatrics (AAP), but for some reason was able to capture the news a bit more. Lately, the image of an X-ray of a grape lodged in a child's throat has been making the rounds on Facebook, and it's sending shockwaves through the psyches of parents everywhere, sending everyone looking for a knife.

The story is harrowing. A 5-year-old child was munching on grapes and, as kids do, they ate too fast or they weren't paying close enough attention, and they ended up swallowing a grape whole. It was a life-threatening situation that needed surgery to correct, reported People. I don't know about you, but just the idea that a simple fruit could send my child to the hospital to get a complicated surgery performed on their throat sends cold chills through my whole body, and rightly so.

The AAP consistently lists grapes at or near the top of the list of choking hazards, and they've always asserted that grapes need to be at least halved lengthwise, or better yet, quartered. That way there's less of the tougher, slippery skin exposed, and the shape is more easily condensed and swallowed with a greatly reduced risk of choking. The round, slick, firm nature of the grape makes it all too easy to slip down your throat when you're not paying close enough attention. In my life, I've choked on some really stupid stuff (seriously, I've choked on Dairy Queen ice cream), so I don't have a lot of confidence that a 4-year-old would do much better.

I want to believe that the real deal about your kid choking on grapes can't possibly be as scary as the viral posts on Facebook would lead you to believe, but I simply don't know. That's why I asked Bronx speech and feeding therapist Lupé Garcia to find out why the delicious orbs are so hard to eat. She tells Romper, "Grapes are filled with nutrition and energy, but yes, they are a big choking hazard." Garcia says that the real issue is that they're almost the exact shape and size of a child's esophagus, so one wrong move, and they get lodged. "When you slice them into quarters, they aren't as hard, and aren't prone to occlude the airway." She says that halving is OK for older kids, but why take the chance?

"Once a whole grape gets coated in saliva, they are extra slimy and slippery and it doesn't take a whole lot for them to get swallowed improperly," Garcia adds, so it's best to eliminate that risk. Make sure that nothing is bigger than one half inch in circumference, and always watch your kids eat the foods. The AAP recommends cutting grapes until aged 5, but Garcia says that's more of a guideline. "For many kids, they eat too fast to stop slicing at 5. Watch their maturity and go from there." My daughter is 7 and I just stopped cutting hers, although I still cut up her hot dogs.

It's all about safety and supervision. It's not a huge deal to slice grapes, and they even have tools to help make it faster, so why not? You don't have to get caught up in media fear and never feed your kids grapes again, but quartering them as soon as you buy them will save you a lot of anxiety.

More Like This
Abbot's Formula-Producing Plant Can Reopen In As Early As 2 Weeks — Now What?
17 Best Potty Training Products For Toddlers
From Captions To Gifts, These Are All The Kindergarten Graduation Ideas You Need
Here’s What You Need To Know About That Viral 1960s Baby Formula “Recipe”