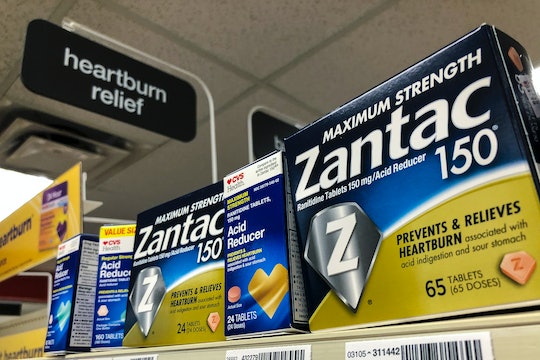 Amid concerns that a medication to treat symptoms of heartburn could be linked to cancer, CVS has stopped selling Zantac and its generic equivalent, the pharmacy chain announced over the weekend. The company said in a press release issued on Saturday, Sept. 28, that the products have been not been recalled and the U.S. Food and Drug Administration (FDA) has not issued any recommendations to not use them, but CVS made its decision to stop selling the medications "out of abundance of caution."

"CVS Pharmacy has suspended the sale of all Zantac brand and CVS Health brand ranitidine products until further notice," the pharmacy said in a news release. Over-the-counter (OTC) ranitidine is widely used across the United States to relieve and prevent heartburn, according to Harvard Health.

"This action is being taken out of an abundance of caution due to a recent Product Alert from the U.S. Food and Drug Administration (FDA) that ranitidine products may contain a low level of nitrosodimethylamine (NDMA), which is a probable human carcinogen," CVS said.

On Sept. 13, the FDA said in a statement that lab tests had uncovered "some ranitidine medicines, including some products commonly known as the brand-name drug Zantac," contain low levels of NDMA, a substance that could cause cancer.

According to the U.S. Environmental Protection Agency (EPA), NDMA forms in "both industrial and natural processes." And the FDA noted that it can be found in "water and foods, including meats, dairy products, and vegetables." NDMA, if taken in "high doses over a long period of time," may increase a person's risk of cancer, as ABC News explained.

On Sept. 26, the FDA issued another statement to alert health care professionals and patients that certain over-the-counter ranitidine tablets sold at Walgreens, Walmart, and Rite-Aid had been voluntarily recalled. "These medicines may contain low levels of a nitrosamine impurity called N-nitrosodimethylamine (NDMA)," the FDA said in a statement last week.

The FDA has urged those taking OTC ranitidine to consider using other products "approved for their condition" and to consult with a trust health care provider for further guidance. You can access a full list of those recalled products here.

Recalls on Zantac have been announced in Canada and France, according to the BBC, but other countries in the European Union and the United States are still "investigating" the matter. "The FDA is continuing to evaluate whether low levels of NDMA in ranitidine pose a risk to patients," CVS said in its statement. "The levels that FDA is finding in ranitidine from preliminary tests barely exceed amounts found in common foods."

While health agencies are working to learn more about the risks associated with all levels of NDMA, Health Canada noted that ingesting "very low levels" of it likely won't cause you harm.

Although the products have not been recalled, customers who have purchased Zantac or its generic version from CVS can return them to for a refund, the company said. And, of course, if you're concerned about how to treat your heartburn, don't hesitate to consult your doctor.