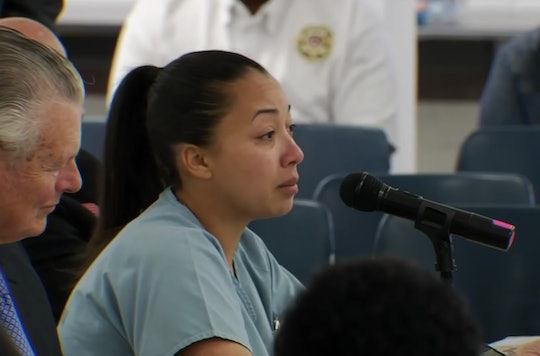 Cyntoia Brown Will Be Released From Prison & Granted Full Clemency

After 15 years behind bars, Cyntoia Brown will be released from prison and granted full clemency in August. The 30-year-old is currently serving a 51 years to life sentence for killing the man who allegedly offered to buy her for sex when she was 16 years old. Tennessee Gov. Bill Haslam is the one who ordered Brown's early release, the Tennessean reported on Monday.

"This decision comes after careful consideration of what is a tragic and complex case," Haslam said in a statement, according to CNN. "Cyntoia Brown committed, by her own admission, a horrific crime at the age of 16. Yet, imposing a life sentence on a juvenile that would require her to serve at least 51 years before even being eligible for parole consideration is too harsh, especially in light of the extraordinary steps Ms. Brown has taken to rebuild her life. Transformation should be accompanied by hope."

The news may come as a surprise to those who have been following the case. Just a month ago, the Tennessee Supreme Court ruled that Brown must serve 51 years total — until she turns 69 — before becoming eligible for release, Rolling Stone reported in early December.

Brown's story was brought into the spotlight in 2010, when a PBS documentary, Me Facing Life: Cyntoia's Story, was made about Brown, who was a victim of sex trafficking.

The New York Times reported that Brown will be released on Aug 7., and she will be on supervised parole for 10 years.

Brown released a lengthy statement regarding her clemency, which Complex shared in full. “Thank you, Governor Haslam, for your act of mercy in giving me a second chance. I will do everything I can to justify your faith in me," Brown wrote. She also thanked those at the Tennessee Department of Corrections, her professors at Lipscomb University, where she is working towards her Bachelor’s degree (she says she is one course away from graduating in May 2019), her family, her lawyers, and everyone who has supported her.

"I am thankful for all the support, prayers, and encouragement I have received," Brown also said, as per Complex, adding that she wants to dedicate her life to keeping others from similar situations. "With God’s help, I am committed to live the rest of my life helping others, especially young people," Brown continued. "My hope is to help other young girls avoid ending up where I have been."

Brown's story has tugged at many people's heartstrings over the years, including a few celebrities. People including Amy Schumer, Ashley Judd, Elizabeth Banks, Rihanna, Snoop Dogg, and Kim Kardashian have all vocalized their support of the campaign to free Brown from prison, the Japan Times noted. Kardashian has been particularly passionate about the issue, and in 2017, she worked with her attorneys to help free Brown from prison, Billboard reported. When the news of Brown's clemency broke on Monday, Kardashian tweeted, "Thank you Governor Haslam."

It's clear that Cyntoia Brown is grateful to be granted clemency and have a second chance at life. Hopefully she keeps her supporters posted on her life — and the work helping young people that she plans to do — after her release.