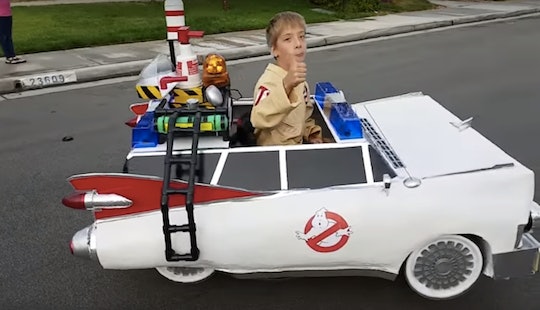 If you're looking for some Halloween costume inspo, then look no further — this one hits all the marks. It's culturally topical, has that cool, tech factor, and it's totally mobile! Admittedly, it takes quite a bit of craftsmanship and a big investment of your time. Even though it's not Oct. 31 yet, this dad built a Ghostbusters costume around his son’s wheelchair and honestly just wins Halloween already.

Ryan Miller constructed the cinematic car for his son, Jeremy, according to Mashable. A true fan of the franchise, Jeremy has "seen all three [Ghostbusters] shows and watches the cartoons on Netflix." Jeremy digs Ghostbusters because "he loves the music [and] he loves that it's a comedy with some pretty cool gadgets and adventure," Ryan told Mashable. You've got to hand it to him, Jeremy has some pretty cool taste.

With working lights and functional speakers for sirens and music, the Ecto-1 is perfection. It's fully tricked-out so that Jeremy can ride and steer in style. Ryan detailed the steps for how to build the wheelchair costume on the Instagram account that he's devoted to his son, providing photographic updates of his costume's progress amidst Jreremy's other academic updates and wheelchair basketball snapshots.

Ryan has built costumes for Jeremy in the past, but notes: "This has been the most complicated and difficult build," citing the need for detail and the complex frame. His Instagrammed photo of Jeremy, sitting proudly in the driver's seat, shows that all of that attention to detail was definitely worth it:

Last year, Ryan built a very cool Star Wars snowspeeder costume, perfect for intergalactic warfare. In deciding what to create for this year, Ryan polled friends and family, asking them to choose from four well-vetted options. As you can see, they definitely chose well, not just for Jeremy but for other kids, too. Ryan and Jeremy took the show on the road, wheeling around for kids at some local children's hospitals so that they could get in on the action. Rady Children's hospital tweeted their love for Jeremy, saying: "Miracle Kid, Jeremy brought some #Halloween fun to @radychildrens last night!"

A couple of months ago, Ryan posted an invitation on his Instagram, saying: "Jeremy wants YOU to come to his Halloween Costume Party this year! Especially if you have your own wheelchair costume!" Though it's unclear whether there's a costume contest, my money's on Jeremy and his dad to take home the prize.