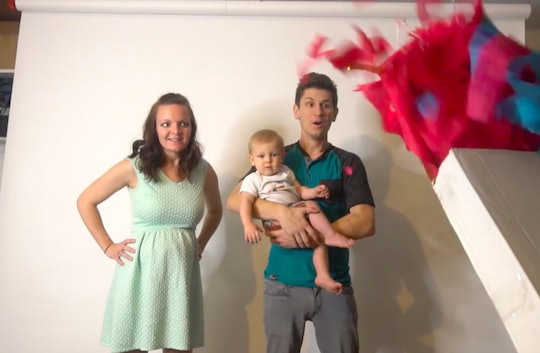 You Have To See This Dad's Gender Reveal Machine

Gender reveal parties keep getting bigger and bigger, but Taylor Calmus, a dad and comedian, might have just won the parenting grand prize. Sure, plenty of people use extravagant cakes, piñatas, and even fireworks, but this dad's Rube Goldberg machine, which he built for the big gender reveal, might be the most epic one yet. In case you aren't totally clear, a Rube Goldberg machine is one of those setups most often seen in cartoons (or in Home Alone). It's a machine that sets out to do an almost ridiculously simple task — like dump a bucket of water from a door or ring a doorbell — using a chain of domino style events.

When Calmus and his wife, Heidi, found out that they were expecting a second child, they decided that they wouldn't wait to keep the gender a surprise like they had with their first son, Theo, who is now 14 months old. When Heidi went away for work for a few days, Calmus enlisted some friends, and baby Theo, and set out to make the complex machine to find out if they were having a boy or a girl.

Calmus told Romper in an email, "She knew I was up to something but she had no idea [of] the extent of it! When she got home, the entire house was in disarray. We literally had to use half of the shower for two days. Lucky for me, she supports my crazy ideas and was totally into it!"

It took Calmus a few days to set the whole thing up. "There was really no planning before we started other than that it was going to start upstairs and end in the garage," he told Romper. "My friend Aaron Huisman and I just took it piece by piece, figuring it out a step at at time. It was a TON of trial and error."

Theo actually helped, and the whole thing kicked off with him tipping a bottle off of his crib (infants are GREAT at that sort of thing).

Two other friends helped out with the build, and his friend Rob Gilligan supplied the original music from his band Valka. It was a real "family" affair. Calmus told Today, "If you watch closely at the 2:10 mark in the video, you'll see a laptop. That was my parents Skyping in to see the whole thing live from their home in South Dakota!"

Calmus gave his buddies the sealed envelope from the doctor so only they knew what kind of confetti was in the cannonball at the end of the Rube Goldberg machine. You'll have to watch the whole video to see how it ends.

You have to hand it to them, it was pretty amazing idea — although Calmus earlier tried to prank his wife with another gender reveal video. In that one, he hands Heidi the envelope from the doctor (that he was going to give to his friends) and tells her that he's already seen it. "No, it's too anti-climatic," she protests as she begrudgingly opens the envelope. In it, there's just a note that says, "gotcha," since he wasn't about to ruin the effect of his yet-to-be constructed Rube Goldberg idea.

"You're so mean," Heidi says. You sort of have to agree with her on that one. Thankfully, Calmus more than made up for it later with his now-viral Rube Goldberg reveal. Expectant parents, you're gonna have to up your game, because this dad set the bar pretty high.